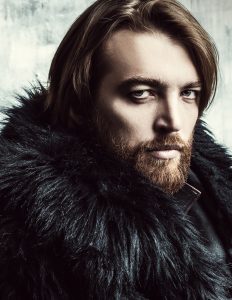 An ancient Latvian of Ķivutkalns, as reimagined by DNA Consultants.

When archeologists recover a prehistoric burial they speak of “grave goods” accompanying it—stone axes, gold objects or pottery. They assume these are possessions of the dead person buried with them to accompany them into the afterlife. They also often refer to these artifacts as prestige items the culture wanted to commemorate and take out of circulation.

Their assumptions are not based on an understanding of ancient religions. Instead, they are another example of modern-day people’s projections.

In many ancient cultures—the near-extinct Tihanama people of the Southeast U.S. are a good example—there was no word for property.

“Indians don’t own things like the white man and they never could accept the white man’s definition of property. The word biqui is the closest thing to ‘have’ or ‘own,’ but it simply means to have the use of for a time, perhaps your life.  A related word is bishtar, gift or gifting. Even your name, or more properly what you are called, is a gift.” (A Memoir of Chief Two White Feathers: Portrait of a Spiritual Practitioner, by Donald N. Panther-Yates, Panther’s Lodge Publishers, 2011, p. 17.)

To take one example among thousands, Ķivutkalns is an archeological site located on the outskirts of Riga, the capital of present-day Latvia. It represented a large hillfort settlement with burials including ten individuals whose genomes were carbon-dated to between 230 and 810 BCE. The site was uncovered on an island in the 1960s in the course of construction of a hydroelectric plant. In addition to protecting against enemies, the fort also served as a residence for the inhabitants, who hunted, trapped, fished, foraged and traded for their food.

As in many Scandinavian sites, there was a hoard in the fort, one that contained neck rings, bracelets, and socketed axe heads. Other objects made of bone, antler, and stone were also found. Most of the individuals at this site were buried within hollowed oak logs and had bone pins placed on top of them.

Was the hoard an accident of history, lost “goods,” or offerings returned to the earth by those who enjoyed them “for a time, perhaps their life”? Was it a case of holding onto or giving back? What about the Sutton Hoo ship-burial? Was it just an egregious display of male warrior power or a sacrifice by someone of the elite who happened to have been blessed with many “goods”? The overawing funerary equipment of the pharaohs can be seen in exactly the same light.

Marija Gimbutas resurrected the civilization of the Goddess and spirituality of Old Europe. The UCLA professor and author went against the prevailing mentality of the male archeological establishment to such an extent that her name is rarely mentioned today and her ideas are widely considered taboo. At the same time, in some circles her work is looked upon as brilliant and epoch making. Gimbutas doesn’t use the term grave goods but she documents hundreds of offerings and sacrifices to the Triple Goddess. Some were objects buried with the deceased or thrown into pits in temples, some were scatterings of valuable items in the open fields or groves, some were ornaments and precious artifacts deposited in watery places like streams, peat bogs and wells.

In a society like ours where funerals are usually conceived as endings, it is hard to relate to ancient peoples, who thought of death as a return to the giver of life. It was a communal celebration instead of a lonely transition to the unknown. Death was part of life for them. The rite was sacred, normal and customary, nothing inexplicable and awkward.

One individual from pagan Latvia whose ancient genome has been captured is believed to have been aged between 40 and 50 when he died. Genetic evidence tells us he would likely have had dark blonde or brown hair, with brown eyes. His burial is one of the most elaborate to have been discovered in the Late Bronze Age cemetery of Kivutkalns. He was laid to rest on his back in an oak coffin, with a bone needle across his breast, fourteen stones placed around his body, and white sand sprinkled beneath his remains. The man’s extravagant burial suggests that he may have been a well-respected, high-status individual among his people.

This biography epitomizes many of the other hunter-gatherers in this far north community three thousand years ago. He was buried with the most valuable thing he had, a needle he used for his lifetime to sew hides and furs he sold and traded. It was returned with honor, like his body, to the Giver of Life.

Historians have long puzzled over why James II, the last Stuart king of Britain, tossed the Great Seal of the Kingdom into the Thames in 1688 while attempting to flee to France. Petulance or piety? Perhaps he was obeying a primitive instinct to sacrifice a valuable possession to the waters, much as one drops a coin into a wishing well. The Thames riverbed has produced an abundance of rich archeological finds from the Celtic, Roman and Germanic past.

Were ancient peoples simple-minded primitives in the grip of literalistic superstitions? Were they not mentally as well as anatomically modern humans just like us? If so, they were capable of the same thoughts, beliefs, observations, aspirations and perceptions as we are today.

“Property is theft” is a modern mantra. The very term grave goods betrays a consumer society’s values. What if the value system of the past was spiritual and communal, rather than materialistic and individualistic?