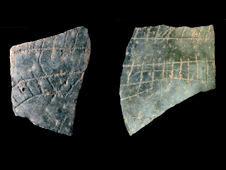 For the researchers who study the famed Diepkloof rock shelter in South Africa, the Preserving African Cultural Heritage meeting was both a coming-out party and a defense. Diepkloof is a key Paleolithic site, the home of 60,000-year-old decorated ostrich shells that are among the first signs of symbolism. Now the team suggests that sophisticated behavior there stretches back as far as 130,000 years ago—nearly twice as old as at any other site.