Using the tools of modern DNA testing and evidence ranging from medieval burgess lists to synagogue records, professors Hirschman and Yates study a large community of Jewish merchants and court officials who were active in the nation-building phase of early Scottish history, 1000-1300 C.E. They discuss the Judaic origins of the Royal House of Stewart, the identity of Aberdeen’s St. Machar, and the possible role of secret Jewish religious practices in the formation of Presbyterianism.

Meet Lord Anthony Ashley-Cooper, the English peer who introduced the writ of habeas corpus the Babylonian exilarch who founded a Hebrew shul in southern France the Scottish princess Maud de Lens who combined several lines of Davidic ancestry and was one of the richest women in Europe and the Clan Douglas warrior who removed the heart of Robert the Bruce to have it buried in Jerusalem.

Chapters on DNA analysis, clan genealogies, the Knights Templar, the Cabala, and the religions of Scotland conclude with a critical essay on Sir Walter Scott’s heroine Rebecca in Ivanhoe, bringing the story of a previously unsuspected Judaic presence in the British Isles down to the present day. An epilogue glances at Scots-Irish emigration to America and looks at evidence of early Jewish communities in Ireland, Wales, the Isle of Man, and the Channel Islands.

Excerpts from When Scotland Was Jewish. . .

Descendants of medieval Spanish, French and Italian Jews — that is, the Western or Mediterranean Jews of Sefarad — are not primarily of Semitic ancestry. Rather, they belong to what is called the R1b DNA haplogroup, the most common male-line lineage in Europe and countries of the New World founded by Europeans.

Bagpipes – musical instrument most associated in the popular imagination with Celts and Scotland – first gained popularity in Scotland at the outset of the 1500s. This was an age which continued the neglect of Celtic culture but which saw the mass expulsion of Jews and Moors from Spain due to the Spanish Inquisition. Significantly, the bagpipe originated in Mesopotamia and Greece between 700 to 400 B.C.E. Hence, it is a Middle Eastern/Central Asian musical instrument, not one indigenous to northern or western Europe.

Kennedy. . . deserves recognition for being the third surname-haplotype studied after Cohen and Sykes. Our donor’s Melungeon family has a tradition of being both French-Huguenot and Jewish. Before settling in Scotland the family lived in France, where their name was Canady. There is a hint of a Mediterranean connection beyond France as well, for the capital of Crete (and site once of a Templar fortress) is Candia, now Irklion. From the 14th century onward it was ruled by the Venetians, who imported sugar from Arabia and gave the world candy. The Ottoman Turks wrested it from the Venetians in 1669 after one of the longest sieges on record, an event that must have sent many Candiani refugees streaming westward.

Knox also urged the adoption of Mosaic law as the governing rule of Scotland. Under it, certain crimes [including] murder, blasphemy, adultery, perjury and idolatry (Marshall 2000, p. 67) would be punishable by death. He further proposed that Scotland create a universal system of education so that every individual in the population would be literate and able to read the scriptures; he also envisaged a universal charity system to care for the indigent, ill and disabled. Both of these concepts are rooted in Judaic tradition. 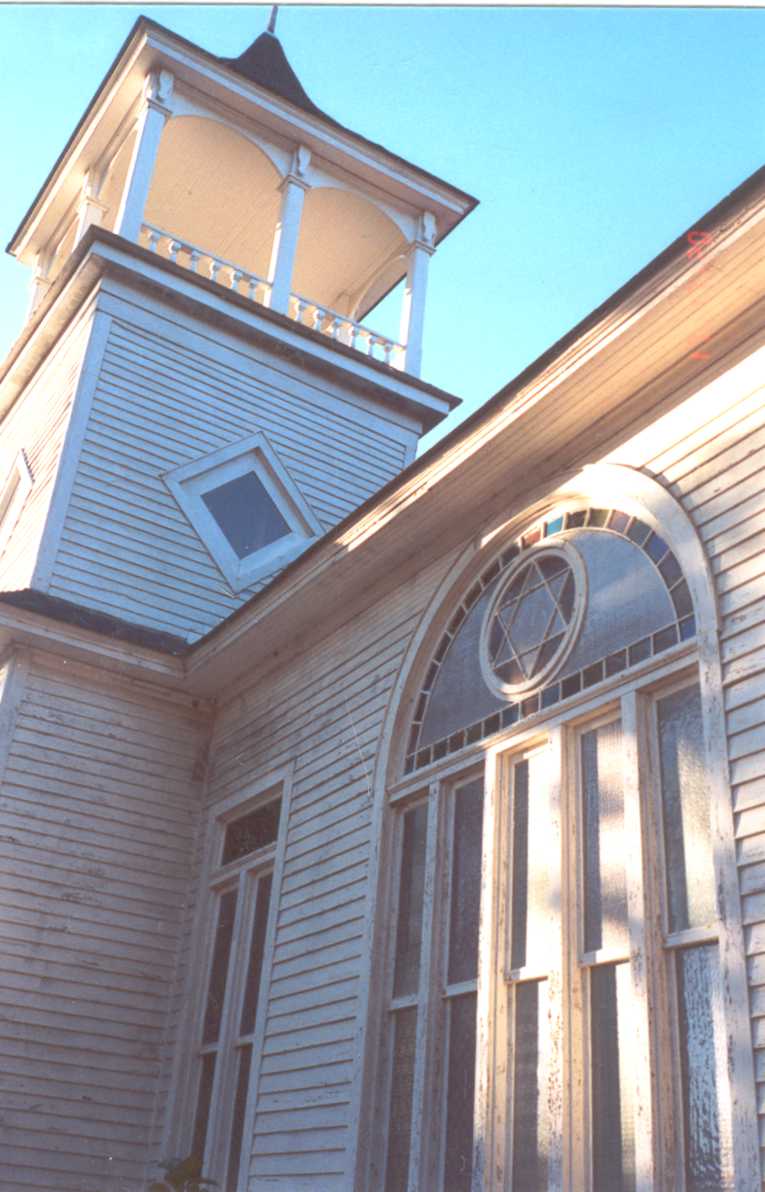 This non-denominational church in Oliver, Ga. is typical of many others built by Scots-Irish emigrants. Notice the Star of David, Moorish porches, Tau and Saltire-styled windows, and absence of crosses in its architecture.
Download sample chapter “Jews in the National Consciousness of Scotland: Scott’s Ivanhoe,” from When Scotland Was Jewish (forthcoming fall 2005)