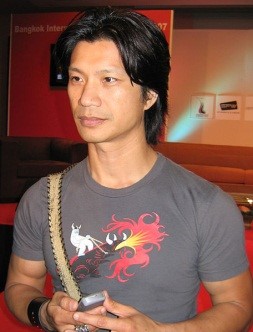 Photo:  Vietnamese-American actor Dustin Nguyen at a press conference for The Rebel at the 2007 Bangkok International Film Festival at SF World in CentralWorld, Bangkok. Credit:  Wisekwai.

Vietnam, officially the Socialist Republic of Vietnam, has the 15th largest population in the world. The capitol is Hanoi, while the most populous city is Ho Chi Minh City. Vietnamese people are one of the original Southeast Asian stocks. Archaeological excavations indicate that Vietnam was inhabited as early as the Paleolithic age. Fossils dating to around 500,000 BCE have been found in caves in northern Vietnam. The ancient Vietnamese nation was annexed by China in the 2nd century BCE, which subsequently made Vietnam a division of China for over a millennium. By 1533, the Portuguese began to land in the Vietnamese delta but were forced to leave due to local turmoil and fighting. Between 1615 and 1753, French traders also engaged in trade in the area. By 1884, the entire country had come under French rule; it became part of French Indochina in 1887. Vietnam declared independence after World War II, but France continued to rule until its 1954 defeat by communist forces under Ho Chi Minh. Under the Geneva Accords of 1954, Vietnam was divided into the communist North and anti-communist South. US economic and military aid to South Vietnam grew through the 1960s in an attempt to bolster the government, but US armed forces were withdrawn following a cease-fire agreement in 1973.