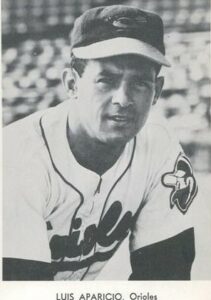 Photo – Luis Aparicio, MLB shortstop and first player from Venezuela elected to the Baseball Hall of Fame, born in Maracaibo

Venezuela, officially the Bolivarian Republic of Venezuela, is a country on the northern coast of South America, consisting of a continental landmass and many islands and islets in the Caribbean Sea. It was colonized by Spain in 1522 amid resistance from indigenous peoples. In 1811, it became one of the first Spanish-American territories to declare independence from the Spanish and to form part, as a department, of the first federal Republic of Colombia (known as Gran Colombia). It separated as a full sovereign country in 1830. It has the world’s largest known oil reserves, discovered in Lake Maracaibo during WWI, and has been one of the world’s leading exporters of oil. Previously, the country was an underdeveloped exporter of agricultural commodities such as coffee and cocoa, but oil quickly came to dominate exports and government revenues. The excesses and poor policies of the incumbent government led to the collapse of Venezuela’s entire economy. By mid-2019, over four million Venezuelans, around 13 percent of the country’s population, had emigrated.

Caracas is the capital of Venezuela. Before the city was founded, the valley of Caracas was populated by indigenous peoples. On 25 July 1567, Captain Diego de Losada, a Spanish conquistador, laid the foundation of the city of Santiago de León de Caracas. De Losada had been commissioned to capture the valley and was successful by splitting the natives into different groups to work with, then fighting and defeating each of them.

In the 1620s, farmers in Caracas discovered that cacao beans could be sold, first selling them to native people of Mexico and quickly growing across the Caribbean. The city moved from largely native slave labor to African slaves, the first of the Spanish colonies to become part of the slave trade.

Maracaibo is the second-largest city in Venezuela after the capital, Caracas. It is considered the economic center of the western part of Venezuela, owing to the petroleum industry that developed in the shores of Lake Maracaibo. It is sometimes known as “The First City of Venezuela”, for being the first city in Venezuela to adopt various types of public services, including electricity, as well as for being located adjacent to shores of Lake Maracaibo, where the name of Venezuela allegedly originates.

Venezuelan – Maracaibo represents 203 unrelated individuals born in Maracaibo in Northwest Venezuela. Each individual had at least one parent born in the same locality. The samples were amplified by PCR using the commercial AmpFISTR Identifiler kit.

Venezuelan – Caracas represents 255 unrelated individuals from Caracas City. 206 had four grandparents born in Venezuela and 49 were randomly sampled. The samples were amplified by PCR using the commercial AmpFISTR Identifiler kit.