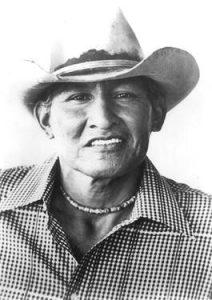 Photo: Will Sampson, full-blooded Muskogee Indian born in Oklahoma, who acted in numerous films including “One Flew Over the Cuckoo’s Nest” and “The Outlaw Josey Wales.”

The Muscogee, also known as the Mvskoke, Creek and the Muscogee Creek Confederacy, are a related group of indigenous peoples of the Southeastern Unites States. They migrated from Mexico and joined previously established Indian tribes in the Southeast like the Apalache and Euchee. Their new homelands were in what comprised southern Tennessee, all of Alabama, western Georgia and part of northern Florida. The Muscogee lived in autonomous villages usually located on waterways and spoke several unconnected languages. Hitchiti (Itsa, a Mexican language related to Maya) was the most widely spoken in present-day Georgia. Hitchiti and Apalache speakers were the first to be displaced by white settlers, and their languages virtually died out. Most of the original population of the Muscogee people were forcibly relocated from their native lands in the 1830s during the Trail of Tears to Indian Territory (now Oklahoma). Many, however, remained in remote areas or blended with whites.

The biggest blow suffered by the Creek Confederacy was the theft of 23,000,000 acres of land by Andrew Jackson after the tribe’s defeat at the Battle of Horse Shoe Bend in 1814. These lands, defined by the fertile Black Belt stretching from Central Alabama to northeast Mississippi, had been targeted by politicians in Washington as crucial for the South’s slave-powered, cotton plantation culture.

A large population of Muscogee people moved into Florida between roughly 1767 and 1821 and these people intermarried with local tribes, white settlers and runaway slaves to become the Seminole people, thereby establishing a separate identity from the Creek Confederacy. Muscogee people in these waves of migration into Florida were fleeing conflict and encroachment by European settlers. Some Muscogee fled European encroachment in 1797 and 1804 to establish two small tribal territories that continue to exist today in Louisiana and Texas. Another small branch of the Muscogee Creek Confederacy managed to remain in the hinterlands around Mobile, Alabama and Pensacola, Florida and is now known as the Poarch Band of Creek Indians.

U.S. Creek/ Muskogean Indians population data are based on blood samples obtained from 6 unrelated individuals living in the Southeastern United States in 2016.