The Goddess in America 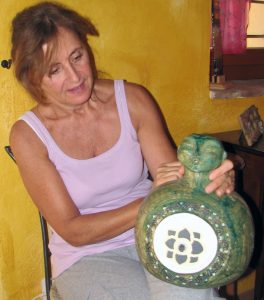 Master Veronese glass artist and jewelry designer Francesca Bortolaso with her first work in clay, a goddess-themed pot she created many years ago for one of her teachers, Dalcir Ramiro, a ceramic sculptor in Rio de Janeiro. The coffee-bean shaped eyes, beaklike nose, rounded O form of the mouth and fourfold earth symbol are signs of the Goddess religion.

Is there a significant cult of the female among the Cherokee? The 18th-century Indian trader Adair said they had “petticoat government.”  As archeologist Marija Gimbutas, archeo-psychologist Erich Neumann, classical scholar Jane Harrison and a host of others have demonstrated, a female-oriented religion prevailed in most places from the Paleolithic Age onwards. Did the Cherokee too have a religion of the Mother Goddess?

In the Cherokees’ “sacred formulas,” as collected by Mooney, the typical love charm or petitionary prayer for good health is addressed to the spider or the moon. Oddly, the moon is conceived as a woman, whereas it is normally regarded as masculine. “The prayer is addressed to Age’yaguga, a formulistic name for the moon,” says Mooney. “The shamans cannot explain the meaning of the term, which plainly contains the word age’ya, ‘woman’ … The ordinary name is nunda, or more fully, nunda sunnayehi, ‘the sun living in the night.’”

In one prayer, the ruler of life is called the Terrible Woman “most beautiful” and described as residing with the Elohi of legend in the Far West. “There in Elahiyi you are at rest, O White Woman. No one is ever lonely when with you.”

Could she be the White Goddess of Old Europe? Might this powerful Cherokee deity be the same as the Moon Goddess and Great Mother of the Old World? How and when did she reach the New World?

The 1st-century Roman author Apuleius gives us a detailed picture of the Mother Goddess cult, whose origins go back to the “Venus figurines” of the Middle Stone Age. In his Metamorphosis, the Goddess turns the hero, Lucius, into an ass after he disrespects her and only changes him back after he acknowledges her supremacy.

We are reminded that she was the first divinity, “the principal of the celestial gods,” who now lives with spirits of the blessed in Eleusie (similar to the Cherokees’ Elahiyi). She is “adored throughout the world in diverse manners, in variable customs and in many names.” In her triple aspect of maiden-mother-crone, she rules the heavens, earth, sea and underworld. Under various guises, she is the mistress of animals, increaser of crops, bringer of love and happiness, and protector against evil spirits. We are told how to recognize her by the moon on her forehead, serpents and corn in her hands, black cloak and rich, “plaited” costume.

Has anyone besides us detected the Mother Goddess in America? Erich Neumann adduced female figurines from Peru and Ecuador that he compared to Neolithic representations of her from Thrace and Troy. Neumann does point out that the cult of the Goddess was perverted and suppressed in Mexico. But images of the goddess are overlooked in most writings about American Indians. 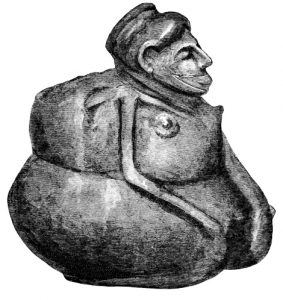 Enigmatic humpbacked Old Woman effigy vessels have attracted the attention of archeologists as they have antiquarians since the earliest white settlement of Tennessee in the 1790s. One typical of the genre shows a covered ceramic jug in the shape of a corpulent woman with her mouth open, squatting, with no arms. The three most productive regions for these extremely common figures are northeastern Arkansas, southeastern Missouri and central Tennessee.

The finds in Tennessee are “without doubt the single most important subject in the pottery of the Middle Cumberland Culture,” say Duncan and Diaz-Granados (p. 178). Their interest is especially aroused by the Woman in the Patterned Shawl variant of the Old Woman, a humpbacked, kneeling female figure with prominent breasts and bun hairdo folding her hands in her lap and wearing a boldly patterned dark cloak-like garment and fancifully trimmed knee-length woven skirt.

Bird Goddess Found on Both Sides of the Atlantic

The “fat ladies” that baffle Americanists have been amply documented and explained in the work of Marija Gimbutas. The humpback symbolizes the mysteries of the female body, a vessel that swells with pregnancy and the milk of nourishment, akin to the exaggerated hips and enormous rump of the Stone Age Venus of Willendorf.

Images of the fertility goddess or earth mother abound in literature, archeology and anthropology, wherever we look, provided we look. Often a pregnant woman holding her belly or breasts with her hands is shown. Innumerable ritual figures in Gimbutas’ publications depict M signs, V-shaped necklaces and butterflies symbolizing the waters of life, milk, nourishment and regeneration. Many of these images portray the Bird Goddess, with her open mouth and closed eyes, a motif, found on both sides of the Atlantic. Tri-lines represent the triple aspect of the goddess (birth, marriage, death). The double swirl stands for the deity’s forces of transformation—woman’s powers of bringing to birth and taking life away at death.

The name used to invoke the moon goddess in Cherokee prayers, Age’yaguga, as we saw, could only be partly explained by anthropologists. Its meaning was unknown even to Cherokee medicine men who repeated it in their formulas. It was recognized that the first element in it was Cherokee for “woman” but no one could determine what the second part meant. Guga (pronounced kuka) is Cherokee for “bottle.” When the Cherokee first came to Indian Territory, they dubbed Bartlesville Gugu-i because the English place-name sounded to them like Bottlesville.  Accordingly, the name of the supreme Cherokee deity must be Bottle Woman.

The Goddess religion did not come across the Bering land bridge, nor was it characteristic of Pacific cultures like the Japanese or Polynesians. It is unlikely it was independently developed in North America. It could only have been brought over from Europe and the Mediterranean. The most likely carriers introducing it were Minoans, Mycenaeans, Helladic people, Anatolians, Cypriots and Greeks. 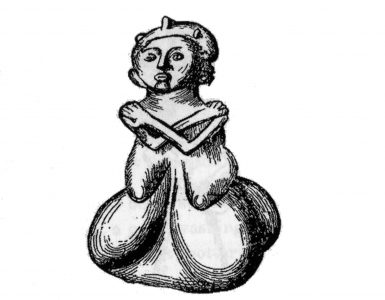 A large Bottle Woman ceramic votive offering personifying the Goddess of Death and Transformation was placed in a child’s grave outside Nashville. She has large breasts, a triple crown and egg-like lower body—the latter exactly like the rock-hewn temples ca. 3000 BCE in Malta. Her mouth is the conventional rounded one of the Bird Goddess. Source: Gates P. Thruston, The Antiquities of Tennessee and the Adjacent States, Cincinnati, Clarke, 1890, p. 138.

James R. Duncan and Carol Diaz-Granados, ”Empowering the SECC: The ‘Old Woman’ and Oral Tradition,” in The Rock-Art of Eastern North America, Tuscaloosa, U of Alabama P, 2004.

Jane Ellen Harrison, Prolegomena to the Study of Greek Religion, 1903, with an intro. by Robert Ackerman, Princeton, 1991.

Marija Gimbutas, The Language of the Goddess, London, 2006.