Before Minoan Crete, the first urban societies in Europe grew up in the Danube River’s fertile valleys, where vast, rich plains were exploited by Neolithic farmers. Some of them grew to substantial size, with populations reaching upward of 10,000 people. This is Old Europe, the epicenter of the Goddess Gene.

The oldest of our seven new markers in the revised Rare Genes from History, The Goddess Gene dates back to Mesolithic times. It is so ancient it has mutated into two forms. We check for both of these on the basis of your Autosomal DNA Profile, the same marker set used for our DNA Fingerprint Plus ancestry test.

It was UCLA archeologist Marija Gimbutas who first described and wrote about its art, culture and religion. The civilization worshiped a Goddess who ruled the heavens, earth, waters and underworld and presided over birth, love and death. As the charts below show, our marker is most prominent in the countries of Romania,  Greece and Serbia, where archeologists have found notable remains of the Goddess religion. Famous Old Europe sites are Padina, Hajdučka Vodenica, Lepenski Vir and Vlasac in the Iron Gates region of Serbia, Vinča-Bela Bardo and Starčevo in the same country, and Turdas in Romania. Lepenski Vir has been described as the oldest city in Europe. It flourished in the Stone Age between about 9500 and 6000 BCE.

A certificate for the Goddess Gene is also available once you receive a positive match in your results.

MARIJA GIMBUTAS’s most influential book is THE LANGUAGE OF THE GODDESS (London:  Thames & Hudson, 2006). Another excellent resource is Merlin Stone’s When God Was a Woman. 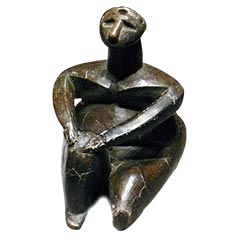 More Information on the Goddess

The Chalice and the Blade (book by Riane Eisler)