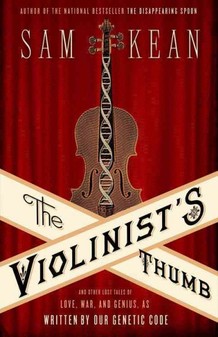 Among the explosive stories in Sam Kean’s excellent “biography” of DNA, The Violinist’s Thumb (Little, Brown, 2012), is a chapter on what makes mammals mammals. The short answer is a placenta, and Kean begins by discussing a rare case of mother and daughter coming down with a hereditary form of leukemia, a sort of “simultaneous cancer.”

The chapter is titled “Love and Atavisms,” and it zeroes in on the role of the major histocompatibility complex in the origin of mammals and selection of sex partners. MHC is the factor that makes some potential mates smell better than others to females (through pheromones). In one experiment, women were given tee shirts males slept in to smell, and they identified the “wildest” smelling as the most attractive. Same smelling T shirts were spurned, perhaps for the same reason members of our own nuclear family are not sexy-seeming to us. (In places with little genetic variety, like Utah, it was shown that pheromone sensors were inoperative.)

“In humans, MHC is located on the shorter arm of chromosome six (p. 169).” In the case of the infant born with her mother’s congenital proneness to leukemia, the cancer cells had deleted her MHC. She developed acute lymphoblastic leukemia, eventually being successfully treated for it, although her mother died of it in the same timeframe.

“We don’t think of cancer as a transmissible disease,” Kean writes. “Twins can nevertheless pass cancer to each other in the womb; transplanted organs can pass cancer to the organ recipient; and mothers can indeed pass cancer to their unborn children, despite the defenses of the placenta (p. 176).”

“Other scientists have painstakingly determined that most if not all of us harbor thousands of clandestine cells from our mothers, stowaways from our fetal days that burrowed into our vital organs. Every mother has almost certainly secreted away a few memento cells from each of her children inside her, too. Such discoveries are opening up fascinating new facets of our biology; as one scientist wondered, ‘What consitutes our psychological self if our brains are not entirely our own?’ More personally, these findings show that even after the death of a mother or child, cells from one can live on in the other. It’s another facet of the mother-child connection that makes mammals special.” (pp. 176-77)

Thus female DNA lives on down the ages, while male DNA shows a fragile character and is doomed to experience dead ends. Siblings may get different “clandestine” cells from the same mother and develop different heteroplasmies, accounting in part for their different personalities, abilities and family traits.