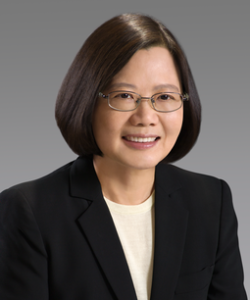 Tsai Ing-wen, President of the Republic of China since 2016

Taiwan is an island nation officially known as the Republic of China (ROC). (Mainland China is the People’s Republic of China, or PRC). Taiwan was formerly known as Formosa, a name meaning “beautiful island” bestowed on it by Portuguese sailors in the mid-16th century. The capital is Taipei. With 23.57 million inhabitants, Taiwan is among the most densely populated countries in the world.

The ROC was established in 1912 while on the Asian mainland. The Chinese Civil War was fought beginning in 1927 between the ROC and the forces of the Chinese Communist Party. During the 1950s and 1960s, after the government had withdrawn to Taiwan upon losing the Chinese Civil War, it was commonly referred to as “Nationalist China” (or “Free China”) to differentiate it from “Communist China” (or “Red China”). It was a member of the United Nations representing “China” until 1971, when it lost its seat to the People’s Republic of China. Over subsequent decades, the Republic of China has become commonly known as “Taiwan”, after the island that comprises 99 per cent of the territory under its control.

Taiwan maintains official diplomatic relations with 14 out of 193 UN member states and the Holy See. International organizations in which the PRC participates either refuse to grant membership to Taiwan or allow it to participate only on a non-state basis under various names. Domestically, the major political contention is between parties favoring eventual Chinese unification and promoting a pan-Chinese identity contrasted with those aspiring to formal international recognition and promoting a Taiwanese identity, although both sides have moderated their positions to broaden their appeal. The Republic of China participates in most international forums and organizations under the name “Chinese Taipei” due to diplomatic pressure from the People’s Republic of China. For instance, it is the name under which it has competed at the Olympic Games since 1984, and its name as an observer at the World Health Organization. The population in 2020 was approximately 23,500,000 people.

Taoyan-Taiwan represents 597 unrelated individuals living in Taiwan. Each collection was arranged through the leaders of each region and supervised by the same. The samples were amplified by PCR using the commercial AmpFISTR Identifiler kit.