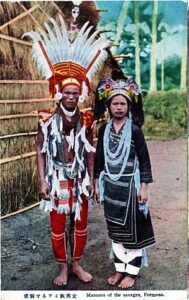 Taiwanese indigenous (formerly Aboriginal) peoples are Austronesian peoples, with linguistic and genetic ties to other Austronesian peoples. Genetic analysis suggests that the different peoples may have different ancestral source populations originating in mainland Asia and developed in isolation from each other. Taiwan is the origin of the seaborne Austronesian expansion whose descendant groups today include the ethnic groups of the Philippines, Micronesia, Indonesia, Malaysia, Brunei, East Timor, Madagascar, and Polynesia. They number about 569,000 or 2.38% of the island’s population. Recent research suggests their ancestors may have been living on Taiwan for approximately 5,500 years in relative isolation before major Han (Chinese) immigration from mainland China began in the 17th century. 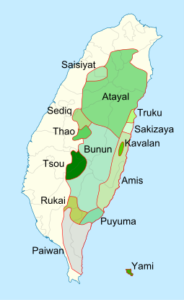 Figure 2 Map of highland peoples according to traditional geographical distribution.

Of the approximately 26 known languages of the Taiwanese indigenous peoples (collectively referred to as the Formosan languages), at least ten are now extinct, and most of the others are to some degree endangered. These languages are of unique historical significance, since most historical linguists consider Taiwan to be the original homeland of the Austronesian language family.

In 2014, the ‘Amis numbered 200,604. This was approximately 37.1% of Taiwan’s total indigenous population, making them the largest Indigenous group. The ‘Amis are primarily fishermen due to their coastal location. They traditionally had a matrilineal kinship system, by which inheritance and property pass through the maternal line, and children are considered born to the mother’s people.

Taiwan – Ami represents 79 individuals who were identified by biogeographic information traced back at least two generations. Each collection was arranged through the leaders of each region and supervised by the same. The samples were amplified by PCR using the commercial AmpFISTR Identifiler kit.

The Atayal people number around 90,000, approximately 15.9% of Taiwan’s total indigenous population, making them the third-largest indigenous group. The Atayal people are believed to have migrated to Taiwan from Southern China or Southeast Asia. The first record of Atayal inhabitance is found near the upper reaches of the Zhuoshui River. During the late 17th century, they crossed the Central Mountain Ranges into the wilderness of the east. They then settled in the Liwu River valley. Seventy-nine Atayal villages can be found here.

Taiwan – Atayal represents 25 individuals who were identified by biogeographic information traced back at least two generations. Each collection was arranged through the leaders of each region and supervised by the same. The samples were amplified by PCR using the commercial AmpFISTR Identifiler kit.