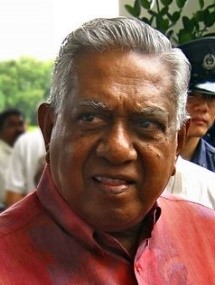 Photo: S.R Nathan, Indian Singaporean who served as president of Singapore from 1999 until 2011.

Indian Singaporeans or Singaporean Indians – defined as persons of Indian ancestry – constitute 9.0% of the country’s citizens, making them the third largest ethnic group in Singapore  after the Chinese and Malays.

The mass settlement of Indians on the island began with the founding of modern Singapore by the British in 1819. Singapore Indians are linguistically and religiously diverse, with ethnic Tamils and nominal Hindus forming majorities. By the 1990s, Local Indian culture had grown somewhat distinct from contemporary South Asian cultures, even as Indian elements became diffused within a broader Singaporean culture. Cable television and the Internet now connect the local Indian community with the culture of India and the Indian diaspora.

Reflecting its history and cultural diversity, Singapore has four official languages: English, Chinese, Malay, and Tamil. The majority of Singapore’s ethnic Indians (58.9%) are Hindu. Although temples may be historically associated with certain communities, Hindu temples in Singapore are open to all regardless or language, caste or religion (non-Hindus may visit the temples). A unique feature of Hinduism in Singapore is the fact that a noticeable number of non-Indians, usually Buddhist Chinese, do participate in a variety of Hindu activities, including praying to Hindu deities, donating money to the temple funds and participating in Hindu festivals like the fire-walking ceremony, and Thaipusam.