As part of our series on Jewish ancestry, we reproduce below an appendix from the forthcoming book, Star, Crescent and Cross:  Jews and Muslims in Colonial America, by Elizabeth C. Hirschman and Donald N. Yates.

Rituals and Practices of the Secret Jews of Portugal

The following is an incomplete list of practices that may be indicative of Jewish origin among Anusim or secret Jews or former Jewish families in the New World today.

Told one is Jewish explicitly by parents, grandparents, or other relatives, a boy when he turns 13, a girl at 12. 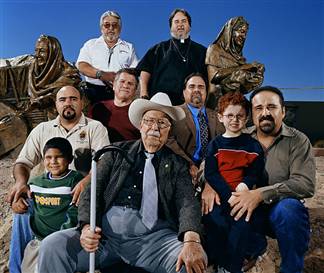 Lighting candles on Friday night when the first star appears.

Clean house and clothes for Shabbat.

Not allowed to do anything Friday night (not even wash hair).

Fasts: three days of Tanit Esther; every Monday and Thursday, fast of Gedalia.

Circumcision; consecration on eighth day (avoiding circumcision because that would bind child to the laws of Moses.

Rending of garments; burial within one day; covering mirrors; spigots in cemeteries.

Seven days, then one year, of mourning.

Tombstones bearing Hebrew names, designations such as “daughter of Israel,” and Jewish symbols (hand pointing to a star, open book of life, torah, star of David).

Sweeping the floor away from the door (to avoid defiling mezuzah).

Having Cabalistic knowledge and practices.

Avoiding pork and shellfish and other non-kosher foods (squirrel, rabbit).

Waiting between meat and milk.

Eating only food prepared by mother or maternal grandmother.

Department of Spanish and Portuguese

To place a rooster’s head over the door of the room where the birth will occur.

After the birth the mother must not uncover herself or change clothes for 30 days.

To throw a silver coin into the baby’s first bath water, especially a son’s.

To say a prayer eight days after birth in which the baby’s name is included.

To bind the bride and groom’s hands with a white cloth while a prayer is said.

To follow the wedding ceremony with a light meal consisting of a glass of wine, salt, bitter herbs, honey, an apple and unleavened bread.

At the wedding ceremony bride and groom eat and drink out of the same plate and glass.

To have ritual meals to which a beggar is invited and serve the food the deceased liked best.

To throw away all water in the home of the deceased.

To leave furniture overturned to show how a relative’s death has upset the family.

To appear disheveled and careless about your own appearance during mourning.

To go to the deceased’s room for eight days and say: May God give you a good night.  You were once like us, we will be like you.

Not to shave for 30 days after the death of a relative.

Not to eat meat for one week after a death in the family, then fast on the anniversary.

Allusions to mascots of Hebrew tribes like deer (Naphthali) and wolf (Levi).

Belief in being descended from the Biblical King David.

Allusions to Jacob’s blessing of his sons and grandsons, e.g. Fishel for Ephraim because he was to multiply like the fish of the sea.

Use of names from Jewish legend and folklore (e.g. Adinah, Edna, Adel, progenitress of the tribe of Levi).

Use of hypocoristic or pet names within the family alluding to Hebrew ones, for instance Zack or Ike for Isaac, Robin (Rueben) instead of Robert.

Naming after a living relative, preferably the eldest born after the grandfather or grandmother, the next born after uncles and aunts and only after the father when these names are exhausted (Sephardic) or naming only after dead relatives (Ashkenazic).

Use of double names like Edward Charles and James Robert.

Changing the name of a child who becomes ill to foil the angel of death.

Favoring names that begin with Lu- to remind the child that the family was once Portuguese (Lusitanian):  Louise, Luanne, etc.

Belief in gematria (numerology of names, determined by Hebrew alphabet)

Jokes about the virgin birth of Jesus by Mary

Using names like Christopher or Christina to dispel doubts about conversion to Christianity.

Knowing whether your family belongs to the Kohanim (priestly caste), Levite (House of David) or Israelite (all the rest) division of Jews.

Swearing an oath with your hat on.

Not mentioning the name of God. Writing it G*d.

Washing your hands before prayer.

A father blessing a son in public.

Saying grace after the meal.

Bowing and bobbing during religious service.

Jokes about the central tenets of Christianity (Immaculate Conception of Mary, rising from the dead of Jesus, etc.).

Deriding idolatry of saints and ornate decor of churches.

Hatred of the pope.

Preparing Saturday’s meal (often a slow-cooking stew, for instance of eggplant) on Friday afternoon so no work is performed on the Sabbath.

Spreading sand from Israel on a grave or in a sanctuary.

Eating tongue on Rosh Hashanah to symbolize head of the year.

Having Bibles containing only the Old Testament and prayer books consisting only of the Psalms.

Having pictures of rabbis and scholars rather than saints in the sanctuary.

Forgiving a debt on Yom Kippur.

Uttering brief blessings when you see lightning, mountains and other natural wonders.

Using only percussion instruments like the tambourine and hand clapping in services.

Silent prayer by congregation after prayers made out loud.

Worship services in the home.

Having 11 elders in a place of worship (minyam).