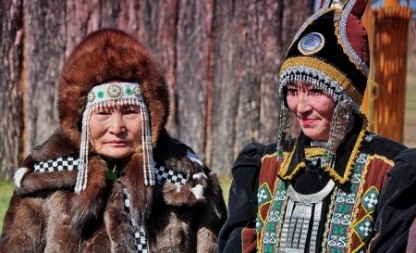 The Russian Federation, or Russia, is perhaps the most ethnically diverse country in the world. The Evenk can be said to be Russia’s “Indians.” They are widespread throughout Siberia, east and west, though in small numbers, and are also found in Mongolia and China. The Evenks are a Tungusic people of Northern Asia. The Tungusic are divided into two branches, and the Evenk are the northern branch. (The southern branch is dominated by the Manchu.) The taiga region which they inhabit is among the most isolated regions of Russia due to the difficulty of transportation, even in modern times. Known as “foragers of the taiga zone,” the Evenk engaged in fishing, hunting, and herding reindeer. During the summer months they lived in temporary settlements along the banks of rivers and lakes and spent the winter months tracking and trapping fur-bearing animals.

Under the tsars, the Evenk experience was much like that of other northern peoples. The Evenk population migrated north in response to Russian expansion along with other groups similarly seeking refuge from the tsarist empire. They could not, however, completely outrun the reach of the expanding Russian state, and fell under the tsarist iasak (fur-tribute)system. Due to the booming fur trade, Russian settlement increased in the north, which in turn negatively affected the population of animals being trapped.

Today, the Evenk are largely concentrated in the Evenkiiskyi Avtonomnyi Okrug. Transportation and communication infrastructure remain underdeveloped. Air travel is the only quick and reliable mode of transportation between Evenk villages, with the alternatives being boats, lorries, and reindeer and motor sledges. Time has slowly eroded the traditional way of life. According to the Scott Polar Research Institute, currently only about 45% of the Evenk population claims Evenk as its native tongue, with the percentage much lower among the younger generations.

Russian – Evenk represents 14 northeast Asian Evens who were sampled in 2007 by the Russian Academy of Sciences in Moscow.