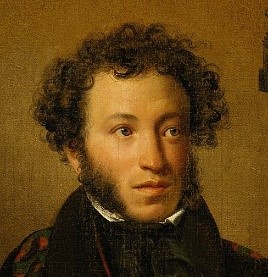 Picture – Alexander Pushkin by Orest Kiprensky. Pushkin was a Russian poet, novelist, and playwright whose family home is a landmark in Pskov

Pskov is one of the oldest cities in Russia. It served as the capital of the Pskov Republic and was a trading post of the Hanseatic League. Later it came under the control of the Grand Duchy of Moscow and the subsequent Russian Empire. Its earliest mention comes in 903, which records that Igor of Kiev married a local lady, St. Olga. Pskovians sometimes take

The importance of the city made it the subject of numerous sieges throughout its history. The Pskov Krom (or Kremlin) withstood twenty-six sieges in the 15th century alone. At one point, five stone walls ringed it, making the city practically impregnable. A local school of icon-painting flourished, and the local masons were considered the best in Russia. Many peculiar features of Russian architecture were first introduced in Pskov. Pskov still preserves much of its medieval walls, built from the 13th century on. Within its walls rises the 256-foot-tall (78 m) Trinity Cathedral, founded in 1138 and rebuilt in the 1690s.

During World War I, Pskov became the center of much activity behind the lines. It was at a railroad siding in Pskov, aboard the imperial train, that Tsar Nicholas II signed the manifesto announcing his abdication in March 1917.

Russian – Pskov represents 62 Russians from Pskov City in the Eastern European region of the Russian Federation who were sampled in 2007 by the Russian Academy of Sciences in Moscow.