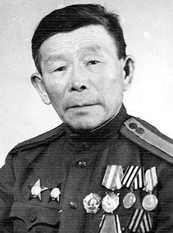 The Hamnigan Buryats or Khamnigan are a Mongolic ethno-linguistic people. Khamnigan is the Buriat-Mongolian term for all Ewenkis. In the early 16th century, the Evenks of Transbaikalia or Khamnigans were ruled by the Khalkha. Those who lived around Nerchinsk and the Aga steppe faced both Cossack demands for tribute and Khori-Buriats trying to occupy their pastures. Most of them came under the Cossack rule and enrolled the Cossack regiments in the Selenge valley. The Khori Buriats occupied most of the Aga steppe and forced the Ewenkis to flee to the Qing Dynasty.

After 1880 Russia’s Khamnigan moved to semi-nomadic herding of cattle, sheep, camels and horses. After 1918 the Evenks, along with their Buriat neighbors, fled over the border into Mongolia, establishing the current Khamnigan communities there. The Khamnigan of Mongolia, numbering 300 households, are scattered among the Buriats and speak only the Khamnigan dialect of Buriat language. They live around the Yeruu Lake, Dornod and Khentii provinces as well as Möngönmorit of Töv Province.

Photo: Semyon Nomokonov, born in 1900 in Delyun in the Trans-Baikal Territory. He was a sniper who fought in the Soviet Army against Germany, credited with 367 kills.

Russian – Khamnigan represents 95 individuals from South Siberian ethnic groups who were sampled in 2007 by the Russian Academy of Sciences in Moscow.