© Tony Holman. All Rights Reserved. Used with permission. You may look and link, but do not copy or download. 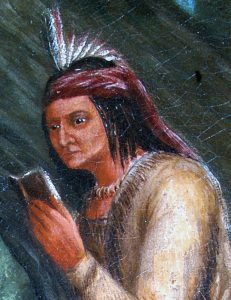 e owner purchased the painting in an antiques shop in the 1980s and is fully aware of its value, historical and otherwise. He believes it is the work of Henry Inman (1801-1846), who went through the Southeast repainting portraits destroyed when the famous Indian gallery in Washington burned. Among those lost was one of Sequoyah that served as the model for the lithograph in McKenney and Hall, a much reproduced album published 1836-1844. The McKenney and Hall portrait has long been the only known contemporary likeness of Sequoyah (see below).

Charles Bird King’s work makes up the bulk of the Indian portrait collection prepared for the War Department, with more than 143 paintings done from 1822 to 1842. The Inman portrait, curiously, depicts Sequoyah as somewhat younger than the Bird painting. The Indian Cadmos, as he has been called, is shown full figure dressed in buckskin with feathers in his long hair and wearing a bone and claw necklace.

The detail shown here appears as a vignette on the back cover of Cherokee DNA Studies: Real People Who Proved the Geneticists Wrong, published this month by Panther’s Lodge Publishers ($19.95). Written by Donald N. and Teresa A. Yates of DNA Consultants, the new book focuses on the hundred-plus participants in the company’s Cherokee DNA Project. It also has chapters on Cherokee history, genealogy and genetics. A full black-and-white version is found on page 154.