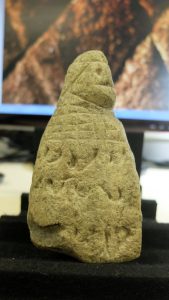 One of the engraved serpentine stones from Puerto Rico with Old World writing. Credit: University of Haifa.

The latest episode in the journey of what may be North America’s most valuable prehistoric records is playing out in Israel.

“This is definitely one of the strangest and most fascinating stories I’ve been involved in,” said laboratory professional Iris Groman-Yaroslavsky according to a University of Haifa press release. “To date, we have not found any similar carved stone art objects from this region of America, and this is why many researchers assumed that they must be fake. However, the microscopic tests we performed show beyond any doubt that the stones were carved around 600 years ago.”

Such an estimate of their date would place the artifacts in the time just before Columbus. Using radiocarbon dating, however, investigators in Puerto Rico dated the grime trapped in the stones’ lettering at “somewhere between 900 BCE and 900 CE.” We believe the stones  are even more ancient.

Buried Treasure in the Mountains

Known as the Nazario Collection, and as the Library of Agüeybaná after a Taino national hero, the anthropomorphically shaped rocks originally numbered around eight hundred. The story of their finding is compelling. An old woman close to death invited the village priest of Guyanilla on Puerto Rico’s southern coast to her hut in the mountains and told him of a treasure belonging to the ancient inhabitants of the area her family had been guarding for centuries. She gave Fr. José María Nazario y Cancel instructions as to where the treasure was buried, hoping the artifacts would be kept for posterity as her family had preserved them for ages. The priest followed her instructions and headed deep into the mountains, eventually reaching a pit covered by a large stone, just as the woman had told him. When he removed the stone, he found hundreds of statuettes.

Since that day, the trove has suffered division, losses, disfiguration, dispersal, theft, repeated removals and constant attack from those who do not accept its authenticity or value.

Archeologists and anthropologists apparently do not read many scientific books published before their lifetime. These Taino antiquities were reported by scholars on Haiti as early as 1787, over two centuries before the Nazario stones came to the attention of academics and traveled to a “use-wear analysis” laboratory in Israel. In 1836, Constantine Rafinesque wrote a study of Taino history based on its oral literature as collected by Spanish authorities shortly after Columbus’ arrival in the New World. Rafinesque reconstructed 77 events, the last being a war in 1490 in Cuba. Other events in this national epic tell of migrations from South America, Central America and into North America. An important event (p. 181) was the first colony in America from a Mediterranean people, who called themselves Hi-Auno or Ionians, dated 1658 BCE.

Rafinesque described the records of transatlantic colonization as follows, “… in the mountains of Limbé [in Haiti] engravings of human figures on a serpentine rock; besides many sculptures in Cave” (p. 165). According to him, Haiti eventually had traces of 44 distinct nations/tribes, which he listed on pp. 212-4 of his long treatise. Chapter VII of his book The American Nations is devoted entirely to the “Haytian” or Taino language. Taino means male noble and Taina female noble.

The original language was apparently what has been termed Pelagian, a non-Indo-European linguistic group echoed in Egyptian, Arabic, Austronesian languages and Quechua in South America. University of California linguist Mary LeCron Foster reported its presence in the Pacific and Americas. (Mary LeCron Foster, “The Transoceanic Trail: The Proto-Pelagian Language Phyllum,” Pre-Columbiana: A Journal of Long-Distance Contacts 1/1-2:88-114.)

Haiti and Puerto Rico and the Antilles were called the Blessed Isles or Fortunate Isles in the Old World. Their civilization was advanced. It’s ironic that modern-day academicians and the popular press refer to it as lost. According to Rafinesque, these Old World colonists seeded all the non-archaic tribes of the Eastern U.S.

The script appears to be a Libyan or early Iberian Bronze Age writing system influenced by the Phoenician akin to Tifinagh, an alphabet surviving among Berber people. The Puerto Rican authorities showed samples to a European Semitic scholar, who verified the script’s affinity, but when they revealed it was from the New World the lines went dead. There was no further communication.

If archeologists have blind spots about cultural connections, they also do not seem very good at differentiating the sex of three-dimensional representations. The corpulent figure with the richly articulated woven garment is without question the Mother Goddess. This figure of prehistoric religion has been brought to life in extensive publications by UCLA archeologist Marija Gimbutas. The Goddess Religion prevailed Europe-wide until invasions by steppes peoples after 3000 BCE, one of the important watersheds in human history.

The Goddess survived in certain female-oriented Mediterranean cultures after that, including Cretans, Cypriots, Berbers, Aegean Greeks, Anatolians, Maltese, Sardinians, Iberians and numerous New World societies. The choice of stone for carving ritual objects was serpentine, or greenstone, representing the Goddess’s rule over the earth and all growing things.

So it would appear that the first Old World peoples who colonized the New World came in the mid-second millennium BCE from Spain or the Canaries. Evidently they traveled the same Canary Current as Columbus.