This is the Native American version of our exclusive, best-selling DNA Fingerprint Test. It examines all your ancestral lines at once, Native and non-Native, including European, to tell you which countries and ethnic groups your ancestors came from.  The Native American tribes and population matches, markers and megapopulation frequency index confirm, within the limitations of our data:

Once you order, we send you a sample collection kit the next day. You will collect a sample with a cheek swab, and return the kit via fa Business Reply Envelope, which is included in your kit. Your sample will be analyzed against standard STR markers, also called CODIS markers. Your values for 15 of these genetic systems are compared with the database known as atDNA 10.4 developed by our population experts.

Total turn-around time:  about three weeks after the lab receives your sample

Our database contains over 60 North and South American and Russian indigenous populations explicitly defined as Native American, some labeled with tribal names, some not, plus Melungeon, Hispanic and other related populations. The populations U.S. Cherokee Admixed (n=62) and (n=92) were added in 2014 and 2017, and U.S. Cherokee Enrolled (n=33) in 2018, respectively. U.S. Shawnee Enrolled (n=24) and U.S. Shawnee Admixed (n=53) were added in July 2022. All these Native American matches are available nowhere else. Your complete report will be uploaded to your online account as a pdf file. You can also choose to purchase a high-quality color print-out to be mailed to you.

Tribes and Nations Included in Test

The 18 Marker Ethnic Panel checks your lab report for 18 distinctive numerical values scattered through your genetic material. These markers were discovered by DNA Consultants. They have been linked to early human migrations branching out of Africa into Asia, Native America and Europe as shown on our map of prehistoric movements of ethnic groups. Two of the markers are Native American. 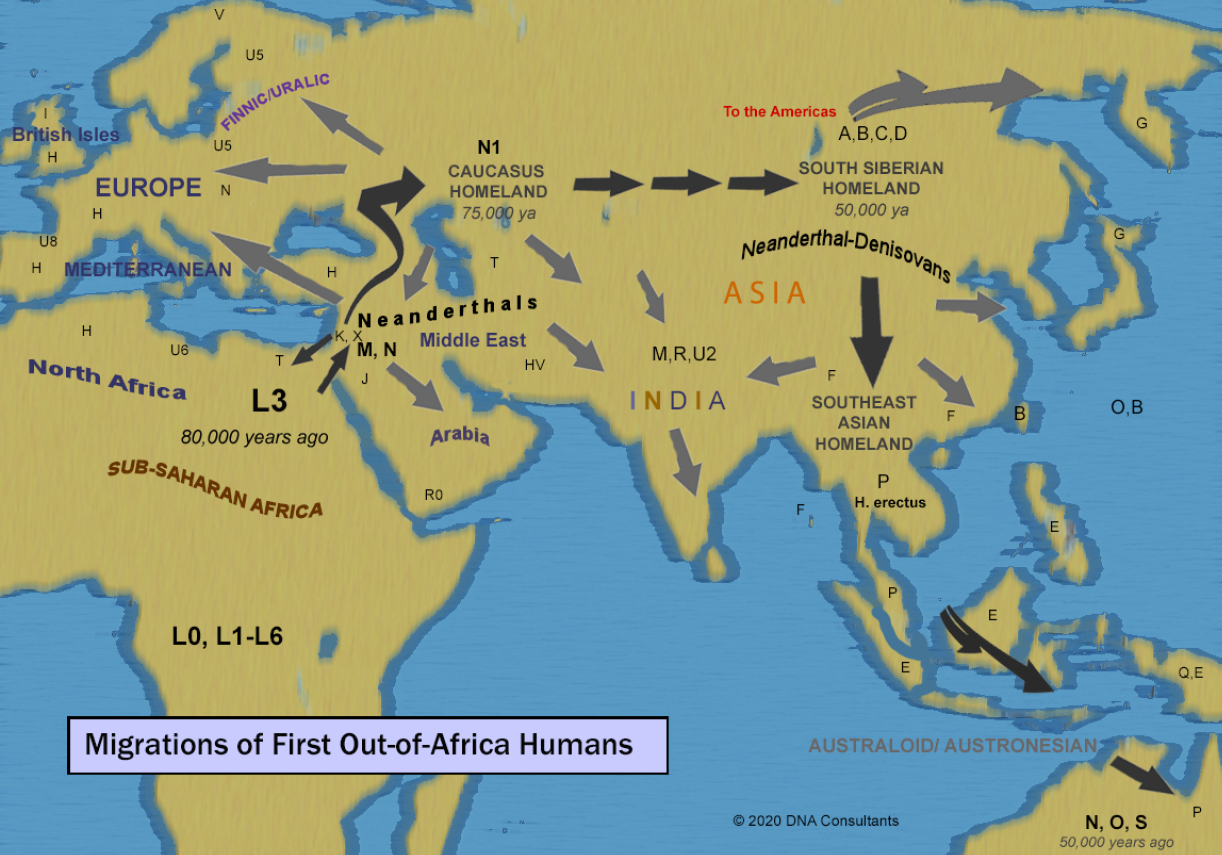 Disclaimer: This is a forensic DNA test based in part on publicly available tribal American Indian data published in J. Ng et al, “Native American Population Data Based on the Globalfiler® Autosomal STR loci,” Forensic Science International: Genetics 24:e12-e13. This is a non-chain-of custody test and cannot be used for legal or administrative purposes. It does not yield percentages of ethnicity. Note that no DNA results are accepted by the Bureau of Indian Affairs to claim membership. Your Native American ancestors may be very far removed generationally or their genes are too weak to register statistically. Your results may or may not confirm expected ethnic composition, family history or genealogical determinations. Alone, no DNA ancestry test may be used to prove identity, biological relationships, nationality, citizenship, immigration or tribal enrollment.

Native American version of our most popular test, it gives you all your ancestry and highlights the Native American. The most sensitive and comprehensive American Indian test on the market!

Categories: All Our Tests, World Class

In the marker section, your report tells you if you have a Native American marker from one parent, from both, or from neither. It is not possible to say which parent you get a marker from if you only receive one marker but if you receive two that means ancestry on both mother’s and father’s side. Read about autosomal markers.

Order a deluxe certificate specifying your American Indian matches or markers after you have received your results.

I'm very happy with the Native American DNA Fingerprint Plus test that I received for Christmas this year and feel thankful that a service like this exists. AncestryDNA wasn't able to detect the Native American ancestry I was confident that I have, but after finding DNA Consultants I am happy to report that I FINALLY have confirmation of this part of my ethnicity. I really enjoyed the depth of the report and plan to continue researching my American Indian ancestors now knowing that I'm on the right track. Life-changing!! Thank you. :)

I purchased the premium plus for Native American test in 2019. May I only order the Legal Premium for business certification purposes or do I have to perform the test again.

I have to say I love my Native American DNA Fingerprint Plus report. My family always wondered if we have Native American ancestry through my dad's father's side, since my Grandpa's facial features (especially his nose), since we really don't know much about my grandpa's side of the family. I found out that my Native American DNA comes from the Miwok Indians of California. MY report also told me my European ancestry, and correctly guessed my Asian and Austronesian ancestry. Since my mom is from the Philippines, and since Filipinos are Austronesian like the people of Malaysia, I wasn't surprised that I had that in me. It also stated that I have Japanese and Chinese ancestry, which is not surprising since a lot of Chinese and Japanese ppl migrated to the Philippines since the 1500's. I'm so happy of my DNA test!!

Every DNA test I've had had shown Native American ancestry, which I knew from my family history and tree. However, with Ancestry's last update, they removed my Native American and increased my Scottish ancestry. Like others this happened to, I wasn't happy about that. A cousin recently shared with me that she and other members of her family had done the Native American DNA Fingerprint Plus test and were very pleased with the results. So I had it done and just got my results. It not only affirms my Native American ancestry but validated two other categories of interest to me: Romani and Melungeon. I have been in a Romani research group for some time, matching my Romani descendants but had been unable to 'prove' I have Romani ancestors. Now I have the proof. I had only recently discovered I have Redbone ancestry, which is most likely the Mulungeon showing up on this report.

"I was born and raised in the Old Cherokee Nation, my home two miles from the NE mountainous Alabama homes of Sequoyah, members of the Chief John Ross family, and Vice Chief, George Lowery. My Cherokee ancestors were living here in 1837, a year before the horrific Trail of Tears. In 1989, to honor the Cherokee and raise Awareness of their history, I became the first person in the modern world to walk the 900 mile route of the Trail. My resulting book, Walking the Trail, One Man's Journey Along the Cherokee Trail of Tears, was nominated for a Pulitzer Prize by Random House. The book is required reading in some schools in the USA, Germany and Japan. I took the NA Plus and Rare Genes tests at DNA Consultants, and I highly recommend it. Its science digs much deeper into your DNA than other popular tests and gets to the truth. AND you can call the company with any questions." Jerry Ellis

Love the results from this test and my Cherokee DNA Test and the Rare Genes. These were done to verify what my mother and others of her family had said about their Cherokee Heritage.My name may be on the Documents,but it is really THEIRS. They would be so proud and I Thank You for that.

Just received results from the Native American DNA Fingerprint Plus analysis. I was very pleased with the results and appreciated the way the results were explained to a non scientist like myself. I strongly believe that Dr. Yates and DNA Consultants are on the cutting edge regarding Cherokee and other Indigenous People DNA research. I spent 10 years discouraging individuals from taking American Indian DNA tests. It was my belief that the companies selling the tests did not have the ability to produce results that verified American Indian DNA. A friend recommended DNA Consultants and I became convinced they knew what they were doing. I was impressed enough that I just ordered the Rare Genes from History Analysis.

I recently received results and I am impressed. I had a 6 x great-grandmother who was of alleged Choctaw ancestry. My NA results substantiates that I have Choctaw ancestry. I did not divulge this to anyone with this site.

I'm writing an extensive article about our Native American ancestry, which is a sum total of 30+ years of on and off research. Putting all the research into one article is quite a task, but it's gratifying. The DNA test results from your company are a vital part of that research, and I've even mentioned your investigators' names in my treatise! Thank you, once again, for your wonderful service to us family historians! Dan Sparta, New Jersey