Thoughts about the origin of mitochondrial haplogroup B and Mother Earth symbolism among the Hopi, Zuni, Hohokam, Fremont Indians and others

I got a holiday present from my wife of an unusual little book titled On the Trail of Spider Woman. Petroglyphs, Pictographs, and Myths of the Southwest, by Carol Patterson-Rudolph (Santa Fe:  Ancient City Press, 1997). Putting this intriguing study together with a travel book by David Hatcher Childress, my son and I took a 4-day road trip into the homeland of the Indians credited with having the first civilization in the Southwest, a settled town life marked by desert agriculture, canals, pottery, baskets, ballcourts, plazas and adobe pueblos, pithouses and kivas. Previous occupants of the area were non-sedentary hunter-gatherers considered to be “paleo-Indians.”

We visited Painted Rock Petroglyph Site outside Gila Bend, in the middle of nowhere, and ended the trip in the barren sands outside Phoenix, where we began it, visiting the Hohokam Pima National Archeological Monument, also known as Snaketown. The former is little seen, and the latter cannot seen, because the Pima (now Gila River Indians) had the ballcourt and other ruins reburied by backhoes in the 1970s. The caretakers of this declared national treasure decided not to open it to anyone to view or visit because of its “sensitive” nature. There are no signs, no roads, nothing left above ground. 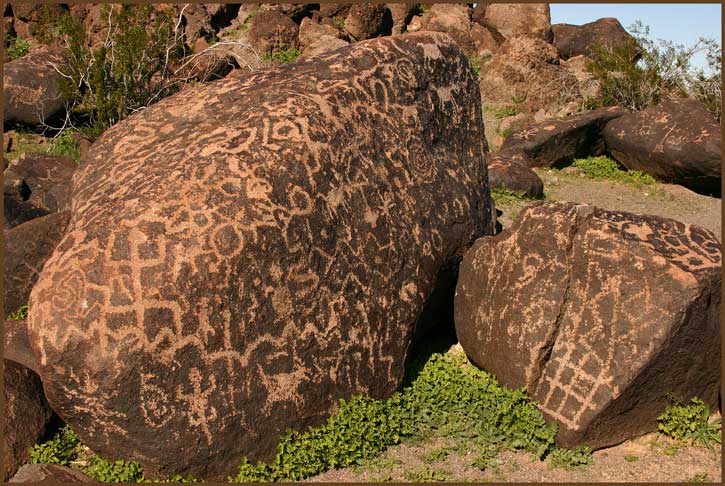 At Painted Rock, the first mystery we pondered was why it was called “painted” rock when there is no paint. Petroglyphs are produced by pecking away the dark desert varnish to make a negative image on the underlying lighter rock. We wondered if it had anything to do with the Paint People, or Phoenicians, Kanawah Indians of the East Coast or Cherokee and Saponi Paint Clans.

The second mystery was the abundance of snake imagery. Famously, snakes in Indian tradition stand for boats and water. We noticed a Corn Cross, the symbol of the Feathered Serpent or Quetzlcoatl religion, supposedly introduced into Mexico from both the East and the West by white, bearded strangers in ships, who brought rule by laws and numerous arts of civilization and banned human sacrifice.

The third thing we remarked upon were the many Great Goddess or Earth Mother or birthing/fertility symbols. Such places were probably shrines where women came to be blessed and get married and give birth. Sun Park in Hopiland has numerous hemispherical carvings about two inches wide where people ground out minerals to eat. These cupmarks or cupoles at petroglyph sites puzzled archeologists until an important article in a scholarly journal clarified their meaning as part of the worldwide phenomenon of pica (pronounced “pie-ka”), “the desire to ingest nonfood substances such as rock powder, clay, chalk, dirt, and other material by some humans, especially pregnant women” (Kevin L. Callahan, “Pica, Geophagy, and Rock-Art in the Eastern United States,” in The Rock-Art of Eastern North America, ed. Carol Diaz-Granados and James R. Duncan, Tuscaloosa: U of Alabama P, 2004, p. 65. 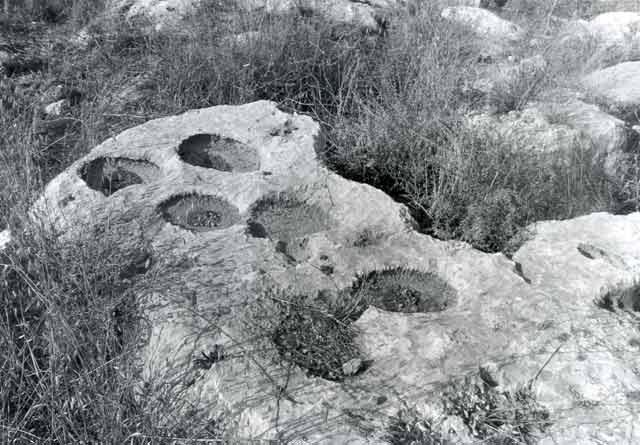 In general, petroglyphs are ignored both by archeology and anthropology, and their study is a no man’s land. Sun Park has a birthing cave and birthing stone. Canyon de Chelly has the most photographed Mother Earth rock formation in the world, Spider Rock, a chthonic monument discussed on page 83 of the Spider Woman book by Patterson-Rudolph.

Who Were the Hohokam?

There were also clear images of horses, riders, people praying, spirals, axis mundi (center of the earth) symbols like the iron butterfly and cross, labyrinths, bilobed axes, irrigation plans, horned beasts, felines, palaces or villages and warriors with spears and shields. We searched in vain for anomalous depictions of whales, elephants and deep water fish, found at other similar sites, but the sun was sinking and we did not have time to make a thorough inspection of the motifs. There is a famous petroglyph of a whale at Old Oraibi.

The name Ho-ho-kam is usually explained as meaning “Those Who Are Departed,” but such an etymology is more a gloss than a literal translation of its meaning and origin. Like many words in the Hopi, Zuni, Pima and Azteco-Utan languages in general it is composed of South Semitic elements. In Egyptian, it literally means “Sea Peoples” or “Foreigners.” The historic Sea Peoples came from Asia Minor and once threatened to conquer the Egyptian empire. The Philistines and Phoenicians are related to them. They were remarkable for their feather bonnets and, like their relatives the Cretans (whose language also came from Asia Minor), for a long-protracted continuance of Mother Goddess worship down into the Bronze Age.

Haplogroup B is the signature lineage of certain Indians in North America. Its ultimate source is Southeast Asia (not Mongolia, as has been suggested for the other three classic Native American haplogroups A, C and D), whence it took multiple circum- or trans-Pacific migratory routes to the Americas (Eschleman et al. 2004). It has high frequencies in Polynesia, which was settled from Southeast Asia, and among the Western Indians of the U.S. such as the Hopi, Zuni (77%), Anasazi (78%), Yuman, and Jemez Pueblo (89%). It is also found in frequencies approaching 70% in the Cherokee and Chickasaw.

We believe Spider Woman is simply an aspect of the Stone Age Great Goddess worshiped by those who came from Southeast Asia through Polynesia and helped colonized the American Southwest. She is the same as the Earth Mother. As in other cultures, she was replaced by sky and sun deities and male hierarchies. But her religion seems to have persisted in the Hohokam, Cherokee and Hopi tribes in a similar fashion to the survival of her cult in the Cretans, Phoenicians and Sea Peoples.

According to Hopi and other traditions, at the end of the last age, the Mother Goddess ceased to be the leader of the people in their wanderings and went back “under the sea”to the east and west whence she and they had emerged. We can only infer from this that Spider Woman, as she was called in Asia and the Pacific, and the Great Goddess, as she was known in the Old World of the Middle East, relinquished her role as supreme deity to the new male pantheons and withdrew across the Pacific and Atlantic Oceans to the distant origins of civilization outside the Americas. Ironically, her memory survived better among the Indian nations than in the war-torn empires and materialistic cultures that dominate world history elsewhere. Indian societies today exhibit rare examples of matriarchy as opposed to patriarchy.