In response to strong customer demand, DNA Consultants has released an autosomal Native American DNA Ancestry Test. It is believed to be the first yes-no test for Native American heritage. The new offering uses autosomal markers and the atDNA 2.0 database to gauge genetic similarity to samples of American Indian test subjects.

The new product is based on the company’s 2009 discoveries of autosomal ethnic markers and 21 published studies of Native American population groups reflected in its database. According to the company, 97 percent of customers claiming Native American admixture (minor amount of ancestry) on their test forms during a pilot study period showed at least one Native American marker. Federally enrolled Indians and those living on Indian reservations were also tested. Results for many individuals were validated with older methodologies that demonstrated descent in a strict Native American female line.

The two markers are described in a sample report as follows:

NATIVE AMERICAN I. This marker is inherited by an individual who has some degree of Native American ancestry. Often it comes from only one parent. As with other markers, if you didn’t get it, that does not mean you don’t have any Native American ancestry. Pairs of markers (alleles) are reshuffled from generation to generation, and it could have been lost.  You may have it, but a sibling might not. By “Native American” is meant any of the indigenous groups who lived in either North or South America before Columbus.  It is the same designation as American Indian. Native American DNA is so distinctive that this test can detect even small amounts of it. Despite what you may have heard, no DNA test can definitively tell you what percentage of admixture you have.

NATIVE AMERICAN II. Similar to Native American I but found typically in people who are half or less Native American and about half Iberian with sometimes a lesser amount of Sub-Saharan African, i.e., Hispanic or Latino.

DNA Consultants was founded in 2003 by Donald N. Yates, Ph.D., who currently serves as principal scientific investigator, and who was responsible for the discoveries underpinning the company’s DNA Fingerprint family of products. Dr. Yates is himself of Native American descent, as are several of the company’s associates. For more information on him see Historians of Native Americans in Wikipedia. 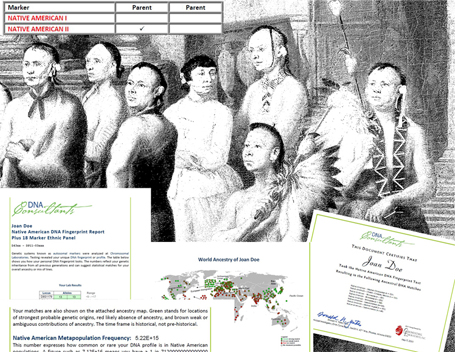