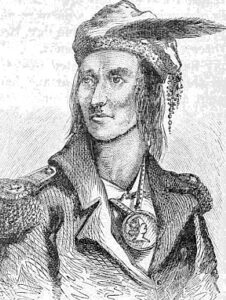 Thought to be one of the more accurate portraits of Tecumseh (1768-1813), who was perhaps the most famous Shawnee, a photograph of Benson John Lossing’s engraving based partially on a sketch by Pierre Le Dru 1812. Tecumseh is shown in a British uniform with a Peace Medal. Glass Negatives of Indians (Collected by the Bureau of American Ethnology) 1850s-1930s.

The Shawnee DNA Project announced last September has finished and customers can see if they have a match to one or both of the resulting forensic populations, U.S. Shawnee Enrolled (n=24) and U.S. Shawnee Admixed (n=53). A high match suggests significant Shawnee ancestry.

Customers who have performed one of DNA Consultants’ DNA fingerprint type tests and have tested their autosomal profile can take the Shawnee DNA Update for $50. Others can start with a Shawnee DNA Test limited to Shawnee and other Native American matches or take the full product, the Native American DNA Fingerprint Test.

As with the Cherokee DNA Test, a legal version for which your sample is collected by a third party in strict chain of custody circumstances is also available for Shawnee matches. The two new populations join more than 60 Native American tribes/groups in the database atDNA 10.4, updated on July 15, 2022. They are numbered as populations 524 and 525.

Shawnee volunteer participants were pleased to find their Shawnee ancestry reconfirmed with high matches across the board, several enrolled Shawnees receiving the match as No. 1 or No. 2.

There was another group of customers for which our research associate Jakay Jarvis was the poster girl. She knew she had Cherokee, because it was in her direct maternal line and she got a match at #14 and #43 with the DNA Fingerprint Test. “I was delighted to discover I also have Shawnee,” she says, having received a match to Admixed Shawnees at #31. She suspects it is somewhere in the Jarvis, Walker and McKinney families, who all came from Kentucky and Viriginia, Shawnee lands. It has inspired her to push beyond her brick walls.

In comparative studies, it was found that the enrolled and non-enrolled Shawnee samples differed in only a few alleles from each other. The enrolled sample matched many other Indian tribes, however, including Native American Michigan, Native American Florida, Mexican Indians (repeatedly) and Native American Saskatchewan. Nevertheless, Shawnees do not cluster with “other” Algonquian Indians.

An artificial modal profile of enrolled Shawnees had the following top mega and meta matches, Turkic, Armenian, Melungeon, Jewish, Central Asian and European American. Like the non-enrolled sample it mostly matched certain Europeans, Central Asian (Altai Turks) and Japanese (closely related to Turkic peoples). From an autosomal perspective, Shawnees seem most like Turks, Siberians and Japanese, with little affinity for Canadian Algonquians, South American Indians or Sub-Saharan Africans. Shawnees did not seem to have a lot of diversity or admixture but could be said to best match other Shawnees.

One gene in particular could be singled out, D16=12. Shawnees with 46% were among the highest who had it. The lowest incidence was 7% among Bantu, and some populations did not have the “Shawnee” allele at all. In this sense, it could be called a private allele, spread between Huichols, Apaches, Shawnees and Southeastern Indians like the Cherokee (41%) in the New World and found concentrated in Estonia (36%), Finland, Lithuania, Latvia, Poland and Pskov, Russia in the Old World.