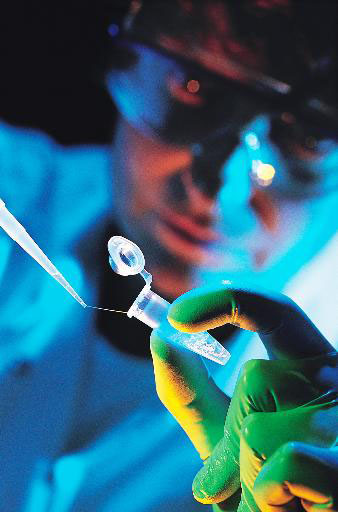 The undated handout photo shows the pipetting of a DNA solution, the typical thread structure of the DNA molecule. DNA holds the blueprint of life. Broken down into the four building blocks of the genetic code, the DNA sequence contains the information for all important biochemical processes. The Bayer AG releases the annual balance on Thursday, March 15, 2001. (AP Photo/Bayer AG/HO)

DNA Consultants has adopted a new database and style of report writing that will make DNA Fingerprint and DNA Fingerprint Plus results more accurate and easier for customers to understand.  This change took place December 14, 2010.

Replacing the original database is a computer program known as atDNA 2.0. This statistical spreadsheet contains autosomal DNA allele frequencies for about 380 populations from around the world, as entered from over 200 studies published in forensics and genetics journals since 1995.

Melungeon (n=40) is the hallmark population added to the existing data. All populations now specify the number of subjects sampled for the original study (in the case of Melungeon, forty persons). Other new populations in atDNA 2.0 are:

All published data have recently been rechecked and brought into conformity with the changing rules and standards of the profession, including practices recommended by the National Institute of Standards and Technology.

Because our customers were often puzzled by the names of countries and populations used before, the nomenclature for our geographical lists of matches and locations on maps was completely overhauled.

IMPORTANT NOTE TO CUSTOMERS:  To learn your matches in the new format, you can do one of two things. You could order the Melungeon Match to see how high Melungeon (n=40) is in your Top 50 world results or you could redo your whole Fingerprint (including European matches, which use a slightly different method now) by ordering the DNA Fingerprint Report Only. The 18 Marker Ethnic Panel remains unchanged, and there is no point in redoing it.

It can be seen from the above examples that the new terms are both more specific and informative.