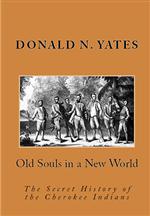 A new book by Donald N. Yates, Old Souls in a New World ($4.95 on Amazon Kindle), has been published by Panther’s Lodge and will soon have an audiobook version, narrated by Rich Crankshaw. Old Souls in a New World includes a chapter on DNA that tells the story of some of DNA Consultants’ customers who found our their mitochondrial DNA lines were Native American, despite what orthodox genetics believed or what other DNA testing companies had said about their unusual haplotypes.

The original study came out in 2009 and was titled “Anomalous Mitochondrial DNA Lineages in the Cherokee.” It came out four years ago.

Now enrolling people in Phase II, Cherokee DNA Studies have found instances of the following haplogroups in solidly documented Cherokee descendants, in addition to the standard types A, B, C, D and X:  H, I, J, K, L, N, T, U, V and W.

To join this project, you must purchase a Native American DNA Test or Native American DNA Report Only. You may email us to receive a 10% discount code. You must also agree to the terms of the Consent Form for the Cherokee DNA Project. This test determines your mitochondrial DNA haplogroup and specific haplotype. Participants in Phase II will have their results compared to the original sample of 52 individuals who purchased mitochondrial DNA testing to determine their female lineage when the study concludes and results are published.

Book Description
What if the history of America’s largest Indian nation is actually a polite modern fiction, one invented by “anthropologists and other friends”? In this sweeping revisionist study of the Cherokee Indians, a scholar trained in classical philology and the new science of genetics discloses the inside story of his tribe. Combining evidence from historical records, esoteric sources like the Keetoowah and Shalokee Warrior Society, archeology, linguistics, religion, myth, sports and music, and DNA, this first new take on the subject in a hundred years guides the reader, ever so surely, into the secret annals of the Eshelokee, whose true name and origins have remained hidden until now. The narrative starts in the third century BCE and concludes with the Cherokees’ removal to Indian Territory in the nineteenth century, when all standard histories just begin. The ancient Egyptians, Greeks, Jews, Romans and Phoenicians have long departed from the world stage. After more than two thousand years the Cherokee remain and are their heirs.