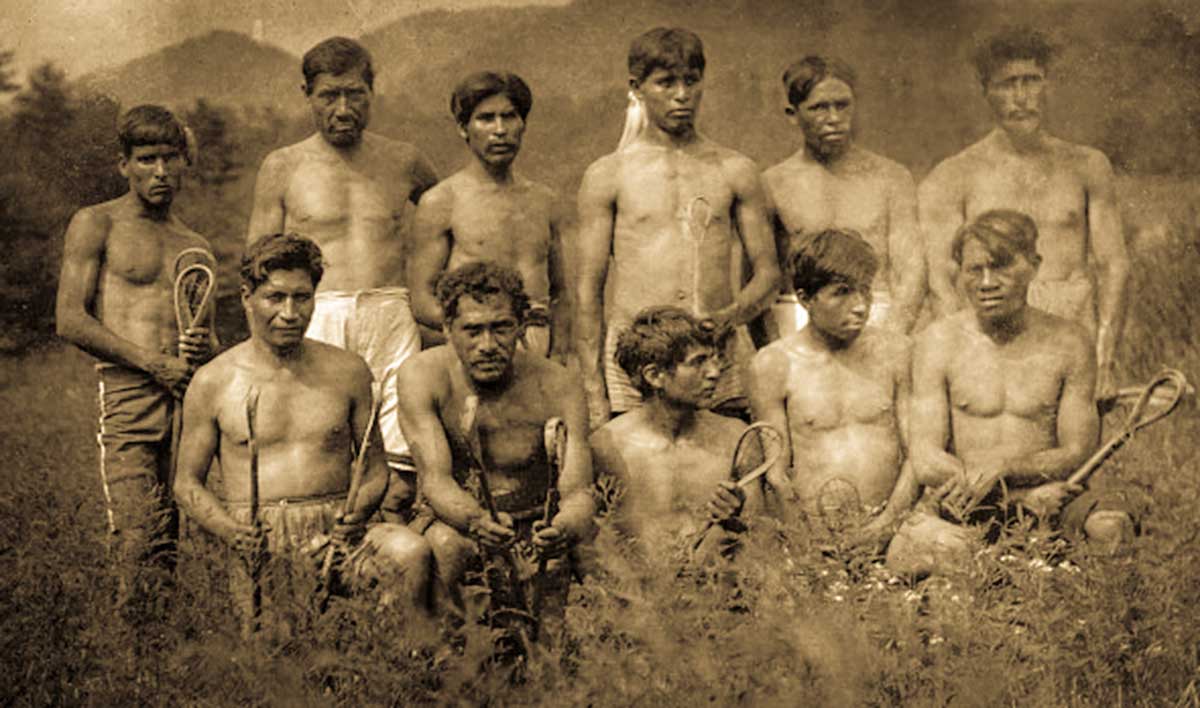 Diversity in Cherokee Ballplay Team in 1913. The youth in back row, third from right, could be a stand-in for Polyclitus’ ideal Libyan Greek athlete (CHEROKEE DNA STUDIES II, chapters 4, 7), while two of the older men have Polynesian physiognomy with curly hair. The man in back, far right, strikes one as Spanish-looking or Sephardic, while the short player on the extreme left seems to have Irish features. National Anthropological Archives Neg. 47748e. Restored by DesignHeaps. From page 31, Cherokee DNA Studies II, by Donald N. Yates and Teresa A. Yates, ISBN 9798542659312 © 2021. [Press Release Dated September 1, 2021]

If Native Americans’ genetic origins are elusive, much is known at least about Cherokee Indians, America’s largest tribal group, right?

It has been said that genetics will make liars of historians, and this remark is nowhere truer than in American Indian studies.

According to the concluding report on a longtime project at DNA Consultants, Cherokee DNA Studies II, nearly everything people think they know about the Cherokees  is mistaken. Just as one example, neither Sequoyah nor Nancy Ward was actually Cherokee.

Sequoyah was half Creek Indian and half Jewish, and he did not invent the Sequoyan syllabary, which is an ancient Mediterranean script similar to Linear A and Linear B from Crete. Nancy Ward, the Tribal Mother, is shown to be most likely Mexican, not Cherokee in origin at all.

Nancy Ward lived most of her life as a white woman on the frontier in Georgia. Before the tribe venerated Sequoyah as a national hero it tried to execute him for witchcraft.

“Who would have guessed that Moytoy, Attakullakulla, Black Fox, Red Bird and most of the earliest figures we read about were probably not even Cherokee in a strict sense,” says Donald Yates, the leading author and CEO of DNA Consultants, the company that sponsored the studies. “Standard Cherokee genealogies based on war department rolls and Emmet Starr’s copious notes are corrupted and mendacious.”

So, are cherished stories about the Cherokees little more than a polite fiction?

Much of what has been passed down is completely verifiable. For instance, all Cherokees once learned to recite the national origin narrative. Its first words are “When we lived beyond the Great Waters,” a reference to the tribe’s migration across the ocean. The legend goes on to relate a story similar to the Tower of Babel. It ends, like the Algonquian Indians’ Walum Olam, with the arrival of white men in ships.

This second and concluding volume summarizes a project that began fifteen years ago. It represents No. 4 in DNA Consultants’ Series on Consumer Genetics and covers 62 “anomalous” DNA test takers who constituted Phase III, the final stage of a multiyear project.

The authors, Donald and Teresa Yates,  are owners of DNA Consultants and both are part Cherokee. In analyzing the mitochondrial DNA of some 200 volunteers from across the country, they found that both their sample and a forensic study of thirty-three card-carrying enrolled Cherokee from North Carolina best matched other Eastern North American Indians, notably Creek, Chippewa and Lumbee, as well as Spanish-Portuguese colonial populations, and additionally, certain ancient European populations like Finnish, Norwegian, Armenian, Croatian, Irish and  Jewish.

Subtitled More Real People Who Proved the Geneticists Wrong, the new publication is available at major booksellers and on the company’s website. It comes in a color paperback version of 371 pages, with numerous historical photographs, charts and other graphics (list price $45.00), epub format ($9.99) and pdf ($9.99, available only from DNA Consultants).

DNA Consultants is a leader in forensic ancestry tests and offers a  Basic American Indian DNA test for $159.00. Over sixty tribal groups, ranging from Cherokee to Chippewa, and including many Mexican and South American Indians, are included. A legal version, which has enabled customers to prove paternity and obtain fishing rights, among other uses, has become available since the Supreme Court’s decision about McGirt v. Oklahoma. No other DNA testing company offers a forensic or legal ancestry test.