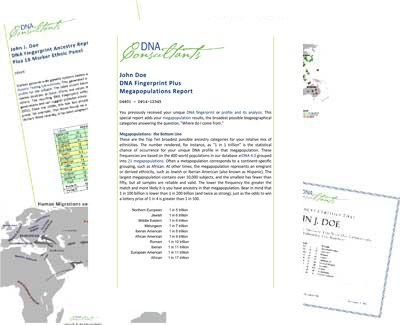 Ethnic estimates by percentages are notoriously misleading. But you get the next best thing in your Megapopulations Analysis, included with every DNA Fingerprint Plus. Now you can get a special Megapopulations Report as a stand-alone product. For only $99 you find out your top ethnic matches (such as American Indian, Northern European, Jewish) and can always upgrade to the full product at any later date. The new Megapopulations Report is a great way to start small with DNA testing with the most important breakdown of your background and ethnic mixture. It also makes a great gift!

Megapopulations: the Bottom Line
These are the Top Ten broadest possible categories for your relative mix of ethnicities. “1 in 1 trillion” is the random probable match or chance of occurrence for your unique DNA profile or fingerprint. The lower the number the greater the match and more likely it is you have ancestry in that population.

To summarize the result given above, this test subject appears to be mostly European, including Northern European and other regions, with a high match for Jewish. There may also be ancestral ties with Melungeons and Middle Eastern.

The database atDNA 4.0 contains the following 21 megapopulations which you can get in your “bottom line” result:

While it is not possible to Megapopulationsextrapolate percentages, you can get an idea of the most important megapopulation matches and their relative value to other ancestries by looking at the Random Match Probability or match likelihood number. For instance, from the example shown, we can infer that the person primarily has Northern European roots and belongs to the emigrant population European American (U.S. and Canada). We can also get a notion of what ancestry is not featured prominently in their mix–evidently there is no American Indian, Romani, African or Asian since these megapopulations are not in the top matches but presumably in the lower range.

By comparing match likelihoods we can state that the person:

Remember that results are not absolute, but only relative. They cannot be equated with percentages.