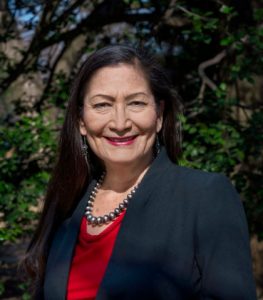 Under a Democratic administration, American Indians are again honored. Deb Haaland is the first Native American head of the Department of the Interior and cabinet secretary. She is a member of the Pueblo of Laguna and a 35th generation New Mexican, going back to the earliest documented settlement of the territory.

Historically, the worst inroads against Native Americans have occurred under Republican presidents. Republican Grover Cleveland set up the infamous Dawes Commission in 1893 which robbed Indians of land, minerals and sovereignty. During the Eisenhower administration in the 1950s dozens of tribes were suppressed and the name of the period in history books was Termination. Both the second Bush and Trump administrations were tone deaf to Indian affairs.

Under President Biden, the prospects for American Indians have risen dramatically. A sign of the times is the landmark legal decision of McGirt v. Oklahoma. In an 86-page explanation last July, the Supreme Court ruled that Indian Country was not restricted to reservations and their occupants but, for the purposes of law enforcement, included all lands the U.S. Government seized from tribes in respective treaties throughout American history. The ruling acknowledged that the United States broke their treaties with the Five Civilized Tribes when they took land in Oklahoma for white land lotteries, railroads and oil drilling. Thus, most of Eastern Oklahoma was still under the jurisdiction of the Cherokee, Choctaw, Chickasaw, Creek and Seminole tribal nations for major crimes.  Specifically, Jimcy McGirt, an enrolled member of the Seminole Nation in Oklahoma, who was sentenced to life imprisonment without parole in 1997 for the crime of sexually abusing his step-granddaughter, should have been tried under tribal law rather than federal and state.

In the majority of the 5-4 verdict was Neil Gorsuch, Ruth Bader Ginsburg, Stephen Breyer, Sonia Sotomajor and Elena Kagan. Justice Gorsuch said, “Today we are asked whether the land these treaties promised remains an Indian reservation for purposes of federal criminal law . . . . Because Congress has not said otherwise, we hold the government to its word.”

McGirt was retried under tribal law and resentenced for his crime, but the case has shaken federal Indian policy to its foundations in affirming that Indian reservations were never disestablished, opening the door to wide-reaching consequences.

According to Scott A. Charles, an investigator at the Federal Public Defenders Office of the Western District of Oklahoma in Oklahoma City, “The tribes have acknowledged in numerous reports, articles, books and other places that there are many Native Americans excluded from being tribal members because their ancestors did not get on the rolls for various reasons and those decisions were made without any idea of the future impact they may have on their children and descendants.” In other words, the government handled tribal enrollment as negligently as it did treaties.

It is unclear what the remedy to the past sins of federal and state Indian policy may be, but there are hundreds of individual cases of redress and reconsideration already in motion, not just in criminal law. Although DNA Consultants specifically has disclaimers that its DNA results may not be used for legal or administrative purposes, there is new hope about Indian identity and recognition among many of Native descent.

“All of the Public Defender Offices here in the state are working on the relationships with the various tribes to best proceed,” wrote Scott in February. “That said, there have been a number of people already raise this issue and various DNA companies have been contacted by other investigators about attempting this testing.  I have asked them all to stand down until we could speak with DNA Consultants as the clearcut expert in this testing to help confirm lineage.  I know there will also be a lot of genealogical work to go with it . . . . This entire process is still in its infancy.”

“For the record,” said Donald N. Yates, Ph.D., principal investigator, “all our tests are intended merely for personal knowledge, not for official purposes, but we do offer a legal premium in exceptional cases.” (See “Legal Premium Introduced,” news from Monday, July 5, 2021).

This being stipulated, DNA Consultants is proud to be a leader in forensic ancestry testing. Its Basic American DNA Fingerprint Test introduced last year was, and is, the only direct-to-the-consumer Native American DNA test that matches you to more than 50 living tribal reference populations. Other companies have extremely limited data, with none being able to boast Cherokee, Choctaw, Creek, Chickasaw or Seminole samples. All other companies have artificial rather than actual definitions of Native American.

“It’s encouraging to have the government rethink a lot of its positions with regard to Native Americans,” said Dr. Yates, who is part Choctaw and Cherokee, descended from Chief Black Fox, among other historical chiefs. “I never thought I would see it.”

Disclaimer: DNA Consultants’  ancestry tests are primarily for private knowledge. Its Native American tests are forensic in nature, based in part on tribal American Indian data published in J. Ng et al, “Native American Population Data Based on the Globalfiler® Autosomal STR loci,” Forensic Science International: Genetics 24:e12-e13. While a legal premium test is a chain-of custody test, it does not provide evidence accepted by the Bureau of Indian Affairs to claim membership. Your Native American ancestors may be very far removed generationally or their genes may be too weak to register statistically. Your results may or may not confirm expected ethnic composition, family history or tribal connections. Alone, no DNA ancestry test may be used to prove identity, biological relationships, nationality, citizenship, immigration or tribal enrollment. Still, the Legal Premium version can be used as a legal document with other evidence and testimony. Among its potential uses are: