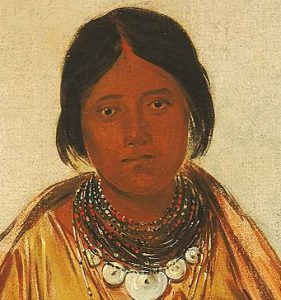 Chee-ex-e-co, daughter of Deer Without a Heart. Painting by George Catlin, 1838. Public domain.

Volunteers are sought for the Euchee Reference Population STR Profile DNA Project, whose purpose is to sample the genetic diversity of persons who may be of Euchee descent and to establish a historical benchmark for their cultural survival. The independent study has appointed an independent genetic genealogy expert as administrator who will screen candidates over the next few months. The initiative follows similar projects for Cherokee, Shawnee, Abenaki and Virginia tribes.

The Euchee have never been studied from the point of view of DNA. They are one of the oldest native groups in the Southeast, though their language has never been captured in a dictionary and few authoritative books or articles exist about them.

Other spellings of the group’s name are Uchee, Uchi, Yuchi and Yuchee. Known as Azuli on old maps, or Children of the Sun, the Euchee were one of the most widespread “tribes” encountered by the French, Spanish and English colonists. They are probably better understood as a confederation of different peoples. Many are biracial if not triracial.

Some individuals with Euchee ancestry belong to the Savannah River Band of Euchee (Uchean) Indians (not a state or federally recognized organization). Others may be officially recognized as members of the Muscogee Nation or some other tribe, such as the Piqua Shawnee Tribe of Alabama.

Though the majority of Euchees have blended and mixed with white people in the South, there are still proud bands of Euchee Indians scattered throughout their original homelands in Tennessee, Florida, Georgia, Alabama, South Carolina, North Carolina and Virginia, where they were inter-settled with the Choctaw, Chickasaw, Cherokee, Apalache and Creek Indians. Euchee identifying as Euchee are concentrated in Oklahoma, especially around Sepulpa.

Tribal membership or association with a band is not mandatory for this DNA project but aids in confirming you qualify for it.

There are also significant populations of Euchee descendants in Hawkinsville, Sparta, Irvington and Sandersville, Ga., according to Richard L. Thornton. His article, “The Uchee (Yuchi)… Everything You Wanted to Know but Were Afraid to Ask!” is the most authoritative source of information available. Much of what has been written about the Euchee is false or out of date, says Thornton, an architect, historian and chief of the Coweta Creek Confederacy.

“The purpose of the testing is to preserve a snapshot of the biological history of people of Euchee descent at a time when admixture, secularization, intermarriage and other factors endanger the coherence and continuity of all ethnic groups,” according to the participant consent form.

If you believe you qualify as a Euchee or part-Euchee descendant and would like to contribute to this scientific endeavor, email the DNA Project Administrator at chaska7@proton.me. Please explain briefly why you want to participate in the project. You will be asked to sign a participant consent form and mail it in before the administrator decides on your case. Discounts on DNA testing are available, as well as a small number of free DNA tests for Euchee elders. Discuss your case with the Administrator!

PLEASE NOTE: No one can be considered for enrollment in the project who hasn’t completed a consent form and mailed it in to the administrator in a hard copy.

Everything you Wanted to Know about the Uchi but Were Afraid to Ask (blog post, July 23, 2019)