With all the news about Neanderthals being superior to Homo sapiens sapiens and teaching “us” how to survive in the distant Stone Age, it is perhaps appropriate to ask whether Neanderthals were the first artists? Or among the first artists? The idea seems shocking. After all, we learned in school that these were brutish savages incapable of higher thinking and symbolic thought or expression. The picture of a Neanderthal making handprints in Spanish caves or fashioning shell necklaces is odd indeed because art is largely “considered evidence of sophisticated symbolic thinking, [and] has traditionally been attributed to modern humans, who reached Europe some 40,000 years ago” according to the recent Wired Science article, “First Painters May Have Been Neanderthal Not Human.”

So how could that be possible? Where did they get artistic expression? And was it genetic? Or was it learned? We are not yet clear whether there were Neanderthal-human babies. After the initial, scientific bombshell in the May 7, 2010 article in Science, “A Draft Sequence of the Neandertal Genome,” suggested that many of us “[have] 1-4% Neanderthal DNA,” and some Neanderthal-human trysts must have been going on, scientists are now doubting it and believe we only share a common ancestor.

A recent article in Discovery, discusses this in “Humans, Neanderthals Did Not Have Babies,” as does a recent Smithsonian article, “Hot for Hominids—Did Humans Mate with Neanderthals or Not?“ The latter takes the middle ground, quoting Ed Yong from Discovermagazine that it was probably a “rare” occurrence and every population has that “weird” person in the group not indicative of the actions of a community. (I am thinking of an adult many observed in my hometown who dressed up in a black cowboy outfit like the Lone Ranger strutting down the street). If this theory is correct, perhaps it wasn’t the popular thing to do.

However, whether your ancestor went to bed with Neanderthal Jane or just taught her to make shell necklaces and ran off with a cousin of hers, or some other scenario, many now think Neanderthals, not humans, may have been the earliest artists. A recent Daily News & Analysis article, “Neanderthals Learned to Make Jewelry and Tools from Modern Humans,” says an international team from the Max Planck Institute in Germany suggests there was a “cultural exchange” between the two species and there is evidence that Neanderthals “learned how to make jewelry and sophisticated tools” from the early ancestors of humans. The reasoning behind this is based on the fact that artistic relics were found near Neanderthal remains but the artwork was “clearly” indicative of human hands. So the conjecture is that it must have been learned. 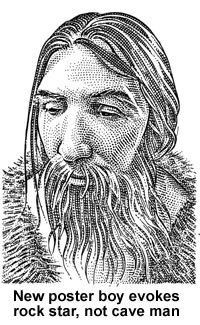 Whether this is true or not, Neanderthals werecreative. According to Kate Wong, in her recentScientific American article, “Oldest Cave Paintings May Be Creations of Neanderthals , Not Modern Humans,” to judge from archeological evidence, Neanderthals not only wore feathers but “painted their skin” and “made jewelry from teeth and shells.” But was their artistic expression learned? There are those that do not think so. According to Eric Wayner, in a recent Smithsonianarticle, “Do Feathers Reveal Neanderthal Brain Power?,” Neanderthals wore feathers as personal adornments, which showed them to be “capable of symbolic expression.” And Wong says, there are Spanish and French caves thousands of years old with cave paintings long thought to be the artwork of early humans that are now suspected to be the work of Neanderthals. Why? She says because of recently refined techniques of radiocarbon dating these paintings are “significantly older” than once thought. In fact, some may be older than the date when the first humans arrived in Europe around 41,500 years ago. When there were thought to be only Neanderthals.

“A large red disk” on one of the Spanish caves, El Castillo, is “at a minimum 40,800 years old, making it some 4,000 years older than the Chauvet paintings which were previously thought to be the oldest in the world.” This and a “stretch of limestone wall with dozens of hands” in the same cave are both thought to possibly be the handiwork of Neanderthal painters because the “estimates” are considered to be at best a conservative “minimum.” According to Ker Than, in the recent National Geographic Daily News article, “The new dates raise the possibility that some of the paintings could have been made by Neanderthals who are thought to have lived in Europe some 30,000 or 40,000 years ago.”

So if Neanderthals were painters where did they get their creative expression if not from humans? Wong says that both “modern humans and Neanderthals might have inherited their capacity for symbolic thinking from their common ancestor.” And she says, if that is the case, “the roots of our symbolic culture go back half a million years.”