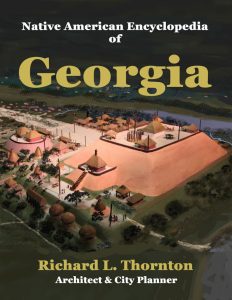 The result of eighteen years of research and eight months in the writing, this compilation by Georgia regional historian/archeologist Richard L. Thornton was much anticipated and will be much appreciated. It includes etymologies of 423 Native American place-names in Georgia, based on dictionaries of the Cherokee, Creek and other languages, plus the author’s knowledge of what he terms Archaic Itsate, a Maya language (don’t Google), and certain other exotic Native tongues, such as Apalachete, Apalachicola and Uchee (for which there is no dictionary).

Hundreds of antiquarian maps and the artist’s own colored drawings enhance the value of the work. An example is on p. 32, “Nagoochee Valley, Detail of Jacques LeMoyne Map.” An important map of the author’s own creation on p. 30 is entitled, “Ethnic Groups Living on the South Atlantic Coast before the Arrival of the Spanish.” Of his predecessors, the author comments that if a place-name “didn’t appear in a Cherokee, Choctaw or Muskogee Creek dictionary, they threw up their hands and quoted folklore.”

Most entries mention in passing the traditional etymologies, before presenting the “real story.” For instance, the entry for Ellijay, the county seat of Gilmer County (pp. 129-30), references the “dubious” etymology of “an anglicized form of the Cherokee name Elatseyi, meaning ‘new ground’” before noting, “Elatse is a Creek word!…which means ‘Foothill People’… pronounced Ĕ : lä : jzhç.” There are periodic “Special Feature Articles” like the one on Chote or Chota (GA & TN), complete with a 1725 rare map detail.

Thornton has some fun with the “romanticized” versions of Cherokee history in Wikipedia and “delusional” family trees of the Motoy dynasty on the Internet, but he is not without his own biases and limitations. He seems to think the Cherokee did not exist until a band of hooligans called Charakeys (“Chair Bearers”) straggled down from Canada about 1670, viciously perpetrated the murder of 32 Creek leaders in their sleep at a peace conference in 1715, and survived to be described by Henry Timberlake in 1765 with hardly any history of their own.

Here’s his account of the events at Tugaloo in 1715:

Charate Haggi, a prominent sorcerer and prophet among the Keowee People told the Chorakey delegates, after their guests had gone to bed, that he had consulted the demons in a sacred fire about what to do. The demons told him that the Charakeys should kill their guests and then switch sides to aid the British. The demons promised that if they did this, the Charakeys would begin the most powerful Native people in North America and rule all of Southeastern North America.[i]

Pretty stirring stuff, right? But is it true? Is it even presented in such a way that readers can know or judge? One of the beautiful things about the republic of letters—and freedom of press and self-publishing— is that readers can make their own decisions and judgments.

Thornton’s knowledge of Georgia’s history and archeology is daunting, but his view of its linguistic diversity doesn’t go far enough back. Take Nacoochee, one of Georgia’s greatest mystery place-names. The earliest name for the Georgia Gold Zone was demonstrably  a variation of Nucay, the word for ‘gold’ that Columbus and De Soto and other European gold-hunters repeatedly used with the local natives. The Taino forms nucay, nozay are related to the African forms nege, nexe (pronounced nuh-kuh) and Egyptian nb-, all meaning “gold, ore, precious metal.”[ii]

It’s not impossible that the earliest Old World presence in Georgia’s Gold Belt goes back to the Minoans, who spoke a type of Greek. According to this etymology, the original name must have been something like Nuh-kuh-gee, meaning “Gold Country.” The Creeks heard in this their name for “bear” (nokosi), the Cherokee interpreted it as their word for “star” (nokwsi) and white settlers renamed the mountain Yonah (Cherokee for “bear”). Eventually the name got corrupted into Nickajack, which preserved its original root.

The Apalachites, who claimed to be the first natives, were unusual in preserving a lot of Greek words, as recorded by mid-seventeenth century French savants. Mellilot, the name of their capital, is pure Greek. It means “honey-lotus or pick of the kingdom.”

The names of rivers can go back to long forgotten languages. Both the Thames and River Cam in England are pre-Celtic names, probably preserving a Paleo-Siberian language spoken by the Picts.[iii]

Rochefort’s history of 1681 noted that the Spanish called the Chattahoochee the Rio del Spiritu Santo or River of the Holy Spirit, “but the Apalachites preserve its ancient name of Hitanachi, which means in their language ‘beautiful and pleasant.’” Constantine Rafinesque wrote that the word hitana in the “Apalachi” language was the same as in Taino or “Haytian” and denoted “noble, good, fine, handsome, lord, chief.”[iv]

The practice of etymology is full of pitfalls. It is easy to be just plain wrong. I was surprised to see that such a publication on Greek etymology as Beekes’ provides, in effect, critical cogency ratings.[v] Word origins that are not obvious receive votes of approval on a sliding scale. Often the derivation is labeled as “disputed” or “not accepted by all.”

Of course almost any place-name could be turned into a book-length treatment all by itself. Thornton’s easy-to-use compilation is laudable for its summary nature, unique expertise in Creek languages and scope. Its pioneering originality and artistic conception are both its strengths and weaknesses.

To purchase or read publisher’s description: