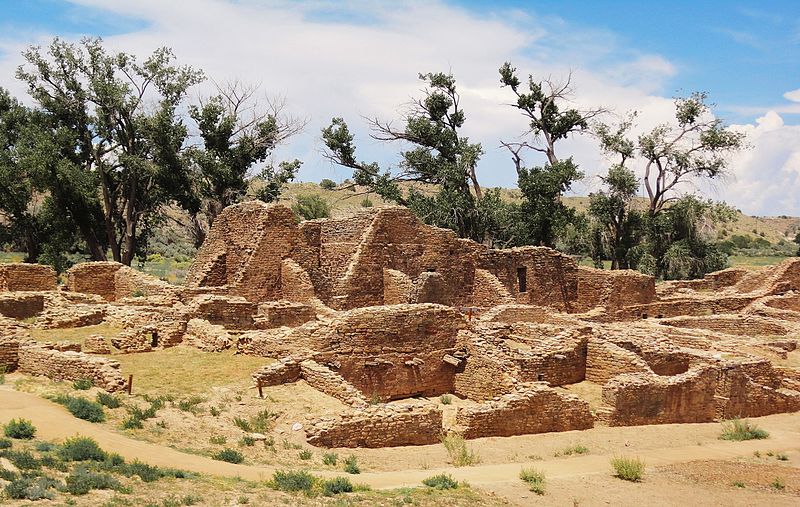 Though having an exotic ancestry might be interesting, there are limits. You might not want to have cannibals for relatives. Luckily, you probably don’t have to worry about that.

We first visited Chaco Canyon in northern New Mexico, and the wind was cold and eerie as we walked along the deep, narrow canyon and gazed upward at the buttery apartment complexes made of stone and mud high above us. Tiny windows had been etched in them. An eagle flew high ahead. Who were these people? The staff at the Visitor’s center were mostly Navajo and not descendants of the original inhabitants of the site, and either could not or would not tell us much. They said they were the Anasazi, a Navajo term meaning “enemy ancestors.” What does that mean? When we pressed for more answers, I was told they belonged to the Chaco Culture. They were Chacoans. They created magnificent architecture. According to the Smithsonian article, “Riddles of the Anasazi,” by David Roberts they were marvelous architects:

The Anasazi built magnificent villages such as Chaco Canyon’s Pueblo Bonito, a tenth-century complex that was as many as five stories tall and contained about 800 rooms. The people laid a 400-mile network of roads, some of them 30 feet wide, across deserts and canyons. And into their architecture, they built astronomical observatories.

But who were these people? According to Alexandra Witze’s National Geographic News article, “Researchers Divided over Whether Anasazi Were Cannibals,” there are some archeologists who think the Anasazi were cannibals because of “piles of butchered human bones, some of which were apparently roasted or boiled. In one instance, ancient human feces even seem to contain traces of digested human tissue.” Archeologist, Christy Turner, has collected over decades what he calls “incontrovertible evidence of cannibalism and violence among the Anasazi” at sites dating “between about A.D.900 and 1250.” According to Amelie A. Walker in her article, “Anasazi Cannibalism?” there was evidence of seven people “not from burials” who were “dismembered, defleshed, [with] their bones battered, and in some cases burned or stewed, [and left] in the same condition as animals for food.” She suggests that there are three possibilities: “ritual “or “hunger” cannibalism or “something else altogether.” Is the culture of the Anasazi one of  cannibalism? Others disagree and think this is something else altogether.

What else could it be?  Local tribes are “deeply offended” by the suggestion that the Anasazi were cannibals says Witze. However, most scientists agree that the Anasazi experienced “brutal violence” though this “drops off after about A.D. 1200.” They just disagree about how to interpret that. J. Andrew Darling, an archeologist with the Gila River Community in southern Arizona thinks the answer is witch ( or what the Navajo call“skin walker”) executions. Darling discovered “after researching the folklore of modern Pueblo tribes” that “dismembering a witch” was the “only way to prevent the witch from wreaking revenge after death.” Debra Martin, an archeologist at Hampshire College in Amherst, Massachussets, argues that “the bone destruction is best explained by several different reasons, including witch execution, chewing by a carnivorous animal, or being reburied” (Witze).

“The best documented indication that the Basketmakers were headhunters is . . . Kinboko Canyon, evidence discovered by archeologist Samuel J. Guernsey of the Peabody Museum of Harvard in 1915, and reported in a 1919 publication of the Smithsonian Institution’s Bureau of American Ethnology,” writes Feldman in the chapter on the Anasazi. He goes on to describe this and other early excavations in the Four Corners area that were quickly hushed up and reburied in horror, including Battle Cave in Canyon del Muerto, now part of the Canyon de Chelly National Monument inside the Navajo Indian Reservation. We read now of flesh-stripping, bone crushing, roasting pits, and sliced off mastoids.

According to this article, around 950 A.D., eleven persons, including women and children, were killed and butchered, cooked, and eaten on Burnt Mesa in New Mexico north of the San Juan River. At a site near the Hopi villages in Arizona, a group of thirty individuals, forty percent under the age of eighteen, were slaughtered and eaten. In a Colorado rock shelter, a large jar was found filled with splintered human bones. . .

The grisly record goes on and on. Feldman writes that by the year 2000 the number of such sites in the San Juan drainage where the Chaco Culture was centered had risen to forty (p. 136).

So witch hunters or cannibals…or something else? We may never know the truth. According to Michael Adler, an archeologist at Southern Methodist University, … “scientists may never be able to prove whether the cannibalism or witch killing theory is correct. Or something else altogether.