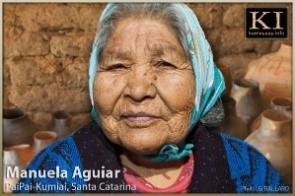 The Pai Pai Indians – also known as Akwa’ala – occupied the northern Sierras in the interior of the northern Baja California Peninsula. Their original territory included the lower Colorado River Valley in the present day municipios of Ensenada and Mexicali, as well as adjacent areas in western Arizona, southern California, and northwestern Sonora.

The Kumiai (Kumeyaay) Indians were hunters, gatherers and fishers who inhabited coastal, inland valley, and mountain regions along the present-day Baja California border region with the United States. The traditional Kumeyaay territory originally extended from around Escondido in California to the northern part of the present day municipio of Ensenada. Occupying the southern section of present-day San Diego County in California, the Kumeyaay inhabited the region near the San Diego Presidio when it was founded in 1769. The Kumeyaay in the vicinity of San Diego were also referred to as the Diegueño by the Spaniards.

In 1596, King Felipe II of Spain ordered the colonization of the Baja California Peninsula.  In October 1697, Jesuit missionaries started arriving in the southern Baja peninsula with the intention of establishing missions. The Jesuit missions played an integral role in the Christianizing of the indigenous peoples.  However, to accomplish their objectives, the missionaries resettled and congregated many of their converts in rancherías that were located close to the missions.  The concentration of the natives had a devastating effect on the aboriginal groups and made them more susceptible to smallpox, typhus, measles and other infectious diseases. The most serious epidemic was the typhus epidemic of 1742-1744, which probably killed 8,000 Indians. In June 1767, King Carlos III of Spain expelled all the Jesuit missionaries from México. Eventually, the Dominicans continued the missionary efforts of the Jesuits, especially in the territories of the Cochimí, Kiliwa, Paipai, and Kumeyaay. However, by this time, southern Baja’s indigenous populations had declined to the point of no return.

Estimates of the Kumiai population in Mexico at the end of the Twentieth Century put their numbers at 600. However, by 2000, the Mexican census recorded only 159 persons five years of age and older who actually spoke the Kumiai language in the state and all but 13 of these also spoke Spanish and were thus bilingual. Most of the Kumiai lived near Tecate.

Mexico & U.S. – Kumeyaay/Diegueno and PaiPai Indians population data are based on blood samples obtained from 27 unrelated individuals living in the Southwestern United States in 2016.

Mexico & U.S. – Kumeyaay/Diegueno population data are based on blood samples obtained from 15 unrelated individuals living in the Southwestern United States in 2016.