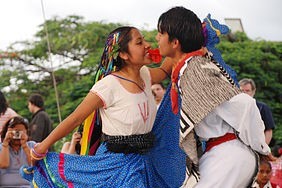 Photo: Mestizo couple dancing to a jarabe, one of the most traditional song forms of the mariachi genre.

Guerrero, officially the Free and Sovereign State of Guerrero, is one of the 31 states which, with Mexico City, comprise the 32 Federal Entities of Mexico. It is divided in 81 municipalities and its capital city is Chilpancingo and its largest city is Acapulco. It is located in Southwestern Mexico.

In Mexico, the term Mestizo (lit. mixed) is used to refer to an ethnic group that can be defined by different criteria, namely a cultural criterion (the language spoken) or a stricter biological criterion. Because of this, estimates of the number of Mestizos in Mexico do vary.  Mexicans from the Northeastern part of the country across the border from Texas are generally considered Mestizo. They come from backgrounds combining European Spanish, Amerindian or Indio and African admixture. Autosomal DNA studies agree that there is a significant genetic variation depending on the region analyzed, with southern Mexico having prevalent Amerindian and small but higher than average African genetic contributions, the central region of Mexico showing a balance between Amerindian and European components, and the latter gradually increasing as one travels northwards and westwards, where European ancestry becomes the majority of the genetic contribution up until cities located at the Mexico-United States border, where studies suggest there is a significant resurgence of Amerindian and African admixture.

Mexican-Southern Mexico (Guerrero) Mestizo population data are based on blood samples obtained from 251 unrelated individuals living in the Southwestern United States in 2016.