After many years in development, the results of a DNA ancestry project enrolling 40 Melungeons were published and made public, marking the end of an attempt to solve the mystery of a Southern U.S. ethnic group with autosomal DNA.

Seeming to lay to rest an old controversy in American history about Melungeons, the scientific data supporting a genetic mixture of white, American Indian and Sub-Saharan African were placed online today by the organizers of DNA Consultants’ Melungeon DNA Project.

The data report a sample of 40 Melungeons’ DNA fingerprints. Population analysis of the participants’ DNA fingerprints was used in an article for Appalachian Journal. Titled “Toward a Genetic Profile of Melungeons in Eastern Tennessee,” the study was co-authored by Donald N. Yates, principal investigator of DNA Consultants, and Elizabeth Caldwell Hirschman, a professor at Rutgers University in New Brunswick, N.J.

“This is a giant stride forward in understanding the mixed ancestry of Melungeons,” said Donald Yates, co-author. “Never before has autosomal DNA been used in attacking the problem.”

The 40 participants’ names were:

Participants were qualified by their genealogies and included many names familiar to those who follow Melungeon genealogy discussion groups on the Internet, including Brent Kennedy, author of the book 1996 book that started the Melungeon Movement, his brother Richard Kennedy; Elizabeth Hirschman, a native of Kingsport, Tenn., along with several members of her family; Wayne Winkler of the Melungeon Heritage Association and author of Walking Toward the Sunset; and Nancy Morrison, creator of the online Melungeon Health referral service. 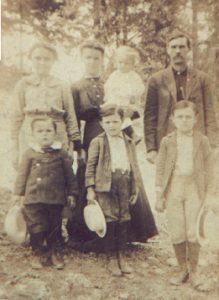 Melungeon family in Tennessee about 1900.