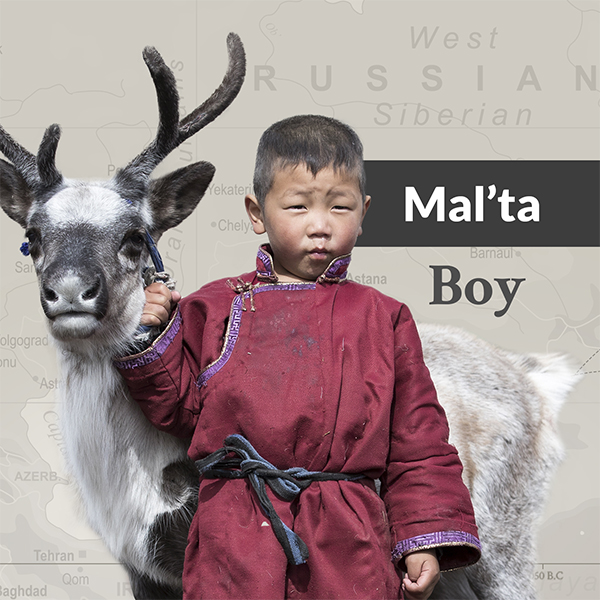 The individual in this sample caused a furor when ancient DNA analysis confirmed he was equally related to Europeans and Native Americans but not close at all to East Asians or modern-day inhabitants of Mongolia and Siberia. The Mal’ta site lies near Lake Baikal in the Eastern Siberian part of present-day Russia. It had been studied over a long period beginning in the 1920s. Mal’ta Boy’s remains were originally labeled MA-1 and stored together with others in St. Petersburg museums. In the 2000s, Eske Willerslev’s team was able to recover genetic material, but they thought the European haplogroups they observed (U and R rather than A, B, C, D or X) indicated contamination from excessive handling by museum and laboratory personnel. Only later, after noticing similar lineages in a nearby burial did they return to their task and publish it. At that point, headlines around the world announced, America’s Natives Have European Roots.

Mal’ta Boy’s remains were carbon dated to between 22,570 and 22,140 years old, placing them in a transitional period between the Middle and Late Upper Paleolithic. A cross-section of an upper arm bone was used to recover his genomic sequences. He was about 3-4 years old and had brown eyes, dark hair and freckled skin. He was buried wearing an ivory crown and bead necklace with a bird-shaped carved pendant.

Mal’ta Boy’s community lived in family units in half-underground houses constructed of animal bones, antlers and skins to protect them from the harsh Siberian climate.

Genetic analysis of Mal’ta Boy and his culture has contributed to a long debate about the origins of Native North Americans. It was found that these Ice Age Siberians had deep ancestry that connected them to Western Eurasians, while they were also ancestors of Native North Americans. More surprisingly, the Mal’ta people appeared to have no direct ancestry connecting them to present-day East Asians. That was unexpected, as it has long been assumed that Native North Americans were of direct East Asian descent. Mal’ta Boy’s Y chromosome haplogroup R is a very ancient lineage thought to have arisen in Southeast Asia during the Paleolithic. It is widespread throughout the world today. His mitochondrial lineage was part of the U haplogroup common worldwide today and also thought to be of very ancient origin.

You may be interested in the following potential matches from the Rare Genes from History test: