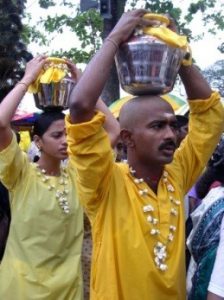 Photo: Malay man and woman in a religious festival.

Malaysia is located between Indonesia and Thailand in Southeast Asia. Evidence of modern human habitation in Malaysia dates back 40,000 years. Traders and settlers from India and China arrived as early as the first century AD, establishing trading ports and coastal towns in the second and third centuries. Their presence resulted in strong Indian and Chinese influences on the local cultures, and the people of the Malay Peninsula adopted the religions of Hinduism and Buddhism. During the late 18th and 19th centuries, Great Britain established colonies and protectorates in the area of current Malaysia; these were occupied by Japan from 1942 to 1945. In 1948, the British-ruled territories on the Malay Peninsula except Singapore formed the Federation of Malaya, which became independent in 1957. Malaysia was formed in 1963 when the former British colonies of Singapore, as well as Sabah and Sarawak on the northern coast of Borneo, joined the Federation of Malay. Bumiputera  (Malays and indigenous peoples, including Orang Asli, Dayak, and Anak Negeri) make up about 62% of the population of 30 million people in Malaysia. Traditional Malaysian art ranges from handwoven baskets from rural areas to the silver-work of the Malay courts.

Malaysia has more than 130 living languages, of which 122 are indigenous. The official language is Bahasa Malaysia.

Malaysian – Malay represents 210 unrelated Malay individuals sampled in 2003 by the Ministry of Science, Technology, and Environment in Malaysia.