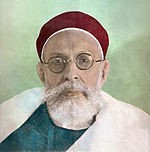 King Idris, first head of the state of Libya, 1951

Libya, officially the State of Libya, is a country in the Maghreb region in North Africa, bordered by the Mediterranean Sea to the north, Egypt to the east, Sudan to the southeast, Chad to the south, Niger to the southwest, Algeria to the west, and Tunisia to the northwest. The sovereign state is made of three historical regions: Tripolitania, Fezzan and Cyrenaica.

Libya is the fourth largest country in Africa and is the 16th largest country in the world. Libya has the 10th-largest proven oil reserves of any country in the world. The largest city and capital, Tripoli, is located in western Libya and contains over one million of Libya’s six million people. The second-largest city is Benghazi, which is located in eastern Libya. Today, the great majority of Libya’s inhabitants are Arabic-speaking Muslims of mixed descent, with many also tracing their ancestry to the Banu Sulaym tribe, beside Turkish and purely Berber ethnicities.

Libya has been inhabited by Berbers since the late Bronze Age, although there were several incursions of other peoples in antiquity. The Phoenicians established trading posts in western Libya, and ancient Greek colonists founded city-states in eastern Libya. Libya was variously ruled by Carthaginians, Persians, Egyptians and Greeks before becoming a part of the Roman Empire.

Libyan represents 103 unrelated individuals from Libya who were sampled in 2005 by the University of Halle in Germany.