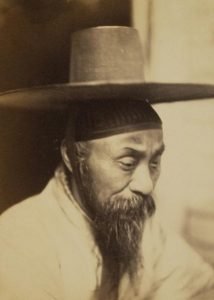 Photo:  One of the oldest photographs of a Korean. Library of Congress.

Koreans live between the Chinese or Manchurians and Japanese on the Korean Peninsula. They have a distinct and separate culture, language and history. It is believed they incorporated a lot of Altaic or Turkic peoples from South Siberia in prehistoric times. During the first half of the 1st millennium, Korea was divided between the three competing states of Goguryeo, Baekje, and Silla, together known as the “Three Kingdoms of Korea”. In the second half of the 1st millennium, Silla defeated and conquered Baekje and Goguryeo, leading to the “Unified Silla” period. Unified Silla eventually collapsed into three separate states due to civil war, ushering in the Later Three Kingdoms. Toward the end of the 1st millennium, Goguryeo was resurrected as Goryeo, which defeated the two other states and unified the Korean Peninsula as a single sovereign state. Goryeo (also spelled as Koryŏ), whose name developed into the modern exonym “Korea”, was a highly cultured state that created the world’s first metal movable type in 1234.

Korea was occupied by Japan beginning in 1905 following the Russo-Japanese War. In 1910, Tokyo formally annexed the entire Peninsula. Korea regained its independence following Japan’s surrender to the US in 1945. After World War II, a democratic government (Republic of Korea, ROK) was set up in the southern half of the Korean Peninsula while a communist-style government was installed in the north (Democratic People’s Republic of Korea, DPRK). During the Korean War (1950-53), US troops and UN forces fought alongside ROK soldiers to defend South Korea from a DPRK invasion supported by communist China and the Soviet Union. A 1953 armistice split the Peninsula along a demilitarized zone at about the 38th parallel.

The Korean population data represent a group of DNA samples from 231 unrelated individual living in greater Korea were sampled in 2003 by the Molecular Hematology Laboratory, Catholic Hematopoietic Stem Cell Transplantation Center at the Catholic University of Korea.

The Korean population data represent a group of DNA samples from 379 unrelated, randomly selected individuals living in the Republic of Korea [South Korea. Samples were obtained by the Dept. of Legal Medicine, in the College of Medicine at Korea University in Seoul.