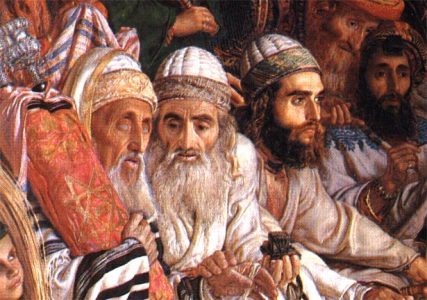 Since the release of Ukrainian forensic data last year, our company has been able to fill a long-standing gap in our countries of Europe and add to our world database an important Jewish homeland. The allele frequencies for Ukraine, where the majority of the population have some Jewish ancestry, confirm our definition of Jewish IV, the Khazar gene.

If you have Russian, Ukrainian or other Eastern European Jewish ancestry we can now say you have a 40 to 80 percent chance of having received the Jewish IV marker from your parents, centered in southern Russia and the Caucasus.

The position of Khazar Jewish ancestry in genetics has been, and will continue to be, controversial, but with Jewish IV our customers can now estimate whether they have this marker in addition to Jewish I, II, and III, which are distinct from it.

In “Heretical History” and numerous other posts, we have argued that the contributions, genetic and cultural, of the Turkic-Iranic Khazars deserve much more attention than the cosseted theories of European Zionist Jews dominating Judaic studies and the official views of the state of Israel on Jewish history, which insist on a Middle Eastern or Near Eastern component for reasons of sovereignty and nationalism.

The Khazarian thesis acknowledges that the most important element is Middle Eastern among “brown” peoples, and that the period of efflorescence of Judaism in Europe began in the late Middle Ages under the influence of migrating Khazars. That’s an entirely different version of history, one much closer to Arthur Koestler’s “THIRTEENTH TRIBE” account, a theory for which he has been castigated by fellow Jews and especially Zionists.

Most Jewish genetics surveys of the “Abraham’s Children” variety totally ignore Khazar genes. The central role of Khazaria was not wanted or wished for among Eurocentric scholars, who tended to denigrate Ostjuden or Eastern Jews. Few historians conceded even the fact that Khazaria was a Jewish state that lasted nearly a millennium, where Hebrew was spoken, preferring to think of it as a sort of travelers tale or land of religious fiction.

Jewish IV is defined as a marker result exhibiting an STR (short tandem repeat) value of AAGG)(AAAG)(AAGG)(TAGG)(AAGG)12 on Chromosome 19 routinely tested in our DNA Fingerprint family of products, introduced in 2006. Autosomal STRs are the basis of DNA Consultants’ forensic method of population matching because of their low mutation rate and ability to predict ancestry.

No other DNA testing company has Ukrainian or Jewish marker data.

Jewish IV was the modal score for Ukraine, found in about two-fifths of the 600 sample representatives (36.72 %). Comparable and neighboring populations showed the following frequencies:


Saratov and Vody are cities in southwestern Russia north of the Caucasus center where Khazaria flourished as a state in the early Middle Ages before being conquered by Islam and forced to retreat westward. They are the closest populations for which forensic data exist to the ancient Khazar capital of Atil on the Volga delta along the Caspian Sea. Poland, Lithuania, Latvia, Romania and Hungary are the modern countries where Khazar Jewish descent is believed to be most prevalent.

The frequency for Jewish IV is minimal or non-existent for the following populations:  Native American (except for Cherokee), Tonga, Gypsy, Mongolian, Altai Turkic, Chinese Han, Arabic and African.