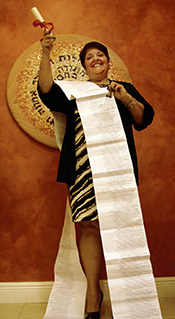 “The story of the crypto-Jews is still the biggest secret in the Jewish and general community,” said Rabbi Stephen A. Leon of the Conservative congregation B’nai Zion in El Paso, Texas. His remarks about the phenomenon of Sephardic descendants rediscovering and reconnecting with their Jewish ancestry were part of a long article on the b’nei anousim  or children of forced converts in Hadassah Magazine this month.

Writer Rahel Musleah looked at several case histories from the millions of descendants whose ancestors were lost to Judaism through forced conversion during the Spanish and Portuguese Inquisition, and who are returning to their roots in greater and greater numbers, from Costa Rica to Cuba, from El Paso to Santa Fe.

For those who successfully find their way back, the journey can mean “a lot of drama, a lot of tears, a lot of joy,” observed Alia Garcia-Ureste, a returnee in El Paso. The daughter of a Lebanese Muslim father and Native American mother, she was a practicing Christian until a DNA test showed her father had the Jewish haplotype G. Upon being questioned, her mother confessed a range of crypto-Jewish practices in the family, from lighting candles at Hannukah and planting a tree in spring to covering mirrors when a relative died.

Another returnee is Genie Milgrom, president of the Society of Crypto-Judaic Studies. She traced one family line in unbroken maternal lineage back to a Jewish family in Fermoselle, Spain that was forced to go underground five hundred years ago. She documented her findings in two books:  My 15 Grandmothers and How I found My 15 Grandmothers:  A Step by Step Guide.

Milgrom converted from Roman Catholicism to Orthodox Judaism when she was 35. She is now 59. “Milgrom is one of the few who has received a certificate of return (granted to born Jews) from the Israeli rabbinate after her research was verified by Inquisition scholars.”

Despite her fervor and legitimacy, however, Milgrom was not joined on her path by any of her family. Her children from a first marriage did not convert with her, and her mother rationalized her conversion as an individual whim. “The genealogical journey created a conflict because it involved the entire family’s identity.” Says Milgrom:  “You come to this place alone, without your family.”

Gustavo Ramirez Calderon, a Costa Rican, experienced having his neighbors break his windows and paint swastikas on his walls after he adopted a Jewish lifestyle. One of his ancestors founded the town where he lives four hundred years ago and he refuses to flee today. “I want to walk with my head held high as a free Jew,” he says.

To Colombian-born Luis Lozano-Paredes, the return process was all about proving his Jewishness apart from a religious process. “I wanted to be a Jew by blood. Logic didn’t apply here.”

Many returnees believe that the ingathering of crypto-Jews represents a precursor event to messianic times. But there is only a handful of rabbis in the United States or in Israel who are truly welcoming to them, and Judaism has not been a prosetylizing religion since Roman times.  Organizations like Bechol Lashon and Kulanu advocate for Jewish diversity and are powerful forces for setting the historical record right, while two rabbis, one a Conservative and one Reform, have established outreach efforts on the Internet, Juan Mejia and Jacques Cukierkorn.