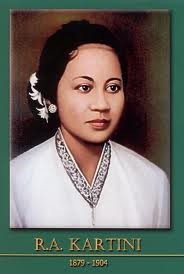 Photo: Raden Adjeng Kartini, born in Jepara, Java in 1879, pioneer in the area of education for girls and women’s rights for Indonesians.

Java is an island of Indonesia, bordered by the Indian Ocean on the south and the Java Sea on the north. With a population of over 148 million (Java only) or 152 million (including the inhabitants of its surrounding islands), Java constitutes 56.1 percent of the Indonesian population and is the world’s most-populous island and also the 13th largest in the world. Despite its large population and in contrast to the other larger islands of Indonesia, Java is comparatively homogeneous in ethnic composition. Only two ethnic groups are native to the island—the Javanese and Sundanese.

Islam became the dominant religion in Java at the end of the 16th century. Today, Islam is the religion of more than 90% of the inhabitants of Java. There are also Christian communities, mostly in the larger cities, though some rural areas of south-central Java are strongly Roman Catholic. Buddhist communities also exist in the major cities, primarily among the Chinese Indonesian. The Indonesian constitution recognizes six official religions.

Fossilized remains of Homo erectus, popularly known as the “Java Man” and dating back 1.7 million years, were found along the banks of the Bengawan Solo River in 1891.

Java represents 95 individuals who were identified by biogeographic information traced back at least two generations. Each collection was arranged through the leaders of each region and supervised by the same. The samples were amplified by PCR using the commercial AmpFISTR Identifiler kit.