In a previous post, “On the Trail of Spider Woman,” we suggested that petroglyphs in Arizona and Utah with female goddess symbolism and birthing ceremonies were connected with the Hohokam (“Sea Peoples”) and other Indians who followed in their wake, corresponding to archeology and anthropology’s Basketmaker Culture. In this and a series of posts over the next few months, we will show pictures of “emergence” petroglyphs from Hawaii, New Guinea, California, Hopi, Zuni, Pima, Papago, Fremont, Zuni, Mimbres, Palavayu and Eastern Woodlands cultural sites that support our thesis. We believe them to be the footsteps and stepping stones of female haplogroup B and its associated lineages.

Mitochondrial Haplogroup B does not have as its dissemination center Mongolia or Siberia or Central Asia but Southeast Asia, specifically Taiwan and Indonesia, and is characteristic, in contrast with Indian groups emphasizing A, C and D, of the Pueblo Indians and some Southeastern Indians such as the Cherokee and Chickasaw and Choctaw. It entered the Americas in successive waves, some of them seaborne, over many millennia. 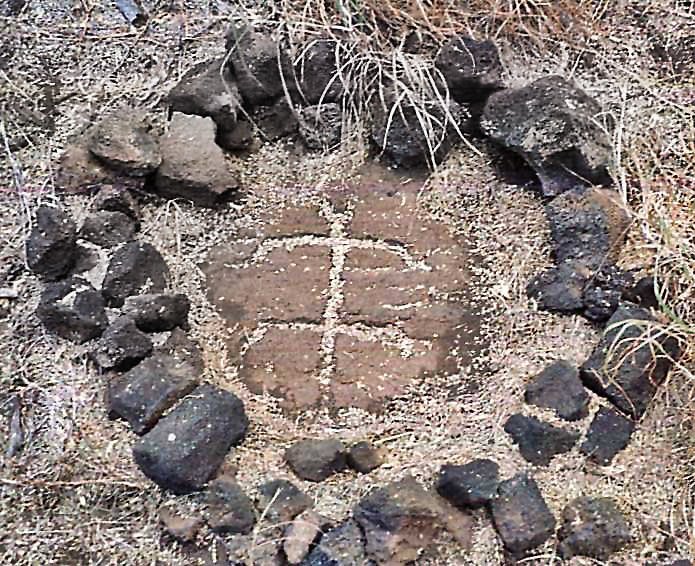 The first picture comes from the western coast of the island of Hawaii. It is considered one of the oldest religious shrines in the Hawaiian Islands. It shows a stick figure carved into a rock set in the ground. As we will see, this is a typical “emergence” figure marking the arrival of a people in a new phase of existence. The symbolism is of a female mother figure giving birth, her progeny here depicted by the taillike extension coming from between her legs. There are thousands of variations of this tribal or clan mother iconography scattered over Asia and the Americas (but not apparently found in Europe or Africa).

The Hawaiians considered the western coast of the Big Island their place of emergence. According to their legends, their people came from the sea from the southwest and were noted for their ability to twist plants and fibers into ropes. Their capital was hence called Hilo (twisted, plaited). On account of their subtlety in these arts they adopted the hula (twist) dance as their national dance. Its original purpose was as a fertility ritual to increase population. (Johannes C. Andersen, Myths and Legends of the Polynesians, Tokyo:  Tuttle, 1969.) The main song sung during the enactment of thehula was called The Water of Kane, or Waters of Life.

The Hawaiian Mother symbol illustrated above seems to be connected with a certain clan. As is often the case, the head of the female figure is differentiated to show which clan. This one has horns and could represent a dragonfly. This insect recurs in American Indian petroglyphs where it is associated with the Water Clan and fertility rites. To “read” the Hawaiian petroglyph properly we might say, “Here is the spot where the Head Mother of the Water Clan emerged and gave birth to her people.” It is likely (although no legends are preserved regarding its use) that women made offerings here to become fertile, attract husbands and be delivered of healthy children. In similar ceremonial sites, such figures mark an actual birthing stone where women squatted to give birth, attended by midwives and clan mothers.

To show the physical resemblance of the Hawaiian design to American Indian symbols we will reproduce  thumbprints below from different traditions. They will be linked together and explicated in subsequent posts in this series.