The Greatest Divide in Human Genealogy and History

You hear a lot of talk about the Neolithic Revolution–the gradual adoption and spread of agriculture, animal husbandry and town life by our prehistoric European ancestors–but the most important epoch in the course of civilization goes largely unnoticed in the history books. That was the abrupt shift from matriarchy and worship of the Great Goddess to the warrior-based governments and language stocks of the steppe-dwelling Indo-Aryan barbarians who invaded Old Europe beginning in the late fourth millennium BCE.

The roots of Europe’s original female-oriented religion are lost in the mists of the early Stone Age, and may even precede the arrival of “modern humans” in Europe and be part of the heritage of Neanderthals. This substrate of a long-lasting peaceful hunter-gatherer society organized around the religion of the Great Goddess absorbed the spreading practice of agriculture from the Middle East beginning in the fifth millennium and reached its apogee of development in a pure form in the fourth millennium.

The cult of the Great Goddess, depicted here in an enthroned version with flanking felines from Çatal Hüyük, an 8,000-year-old shrine in present-day Turkey (p. 107), was the lifelong object of study by Lithuanian-American archeologist Marija Gimbutas, whose most influential book is The Language of the Goddess (London:  Thames & Hudson, 2006).

In most regions, the axe fell on this ancient civilization–quite literally–after 3000 BCE. As confirmed in Jane McIntosh’s Handbook to Life in Prehistoric Europe (New York:  Facts on File, 2006), there was a clear line of demarcation between old and new Europe, from the Balkans to Britain, Spain and Scandinavia. The archeological record tells the story of a sweeping and abrupt end to things. The first metal weapons appear in the graves of elite males along with hoards of gold and jewels. Axes previously used to clear forests for agriculture are now battle-axes. Burials are single rather than family and clan-oriented. Whole villages were massacred and depopulated. Fortifications grew as violence escalated. The horse, venerated as just one of the totem animals of the Goddess since the early Stone Age, becomes the symbol of the warrior, along with the chariot and boat. Rock art features ithyphallic warriors wielding weapons or shooting arrows at each other. The transition can also be seen in the establishment of the Pharaohs in Egypt about 3500 BCE.

So, rather than one transformation, European civilization first went through a Neolithic Revolution, then conversion to warrior-dominated patriarchal societies. It can be postulated that the matriarchal societies eagerly adopted agriculture but exhausted soils, destroyed vital forests and became weaker and smaller-bodied due to a changed diet, falling prey after 3000 BCE to the barbarian warriors of the steppe, who found the accumulation of wealth and unprotected agrarian settlements of Old Europe easy pickings. Climate change could have been a contributing factor.

James Joyce called history “the nightmare from which one cannot wake.” If we take a long view of human events, this nightmare began about five thousand years ago. Other-worldly religions like Christianity introduced a further element of alienation and turning away from the sources of life. Before that, people were happily alive, awake, in tune with nature and celebrated life under the auspices of matriarchy. 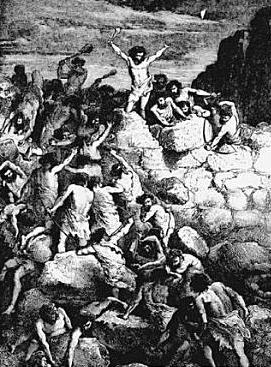 Assailants with bows and arrows attack a fortified Neolithic settlement in Furfooze, France, who defend themselves by hurling stones and raising clubs. Reconstruction from Louis Figuier, Primitive Man (London:  Chatto and Windus, 1876).