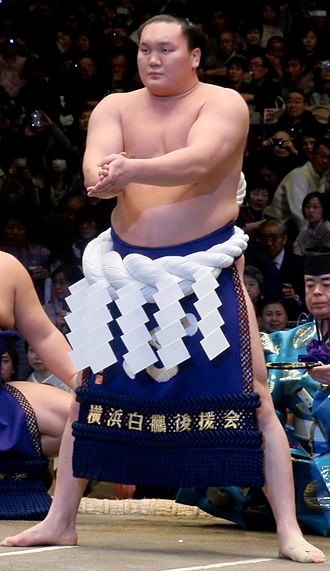 Photo: Hakuhō Shō (白鵬 翔, born 11 March 1985 as Mönkhbatyn Davaajargal, is a professional sumo wrestler (rikishi) from Ulaanbataar, Mongolia. In May 2007 at the age of 22 he became the second native of Mongolia, and the fourth non-Japanese overall, to be promoted to the highest rank in sumo, yokozuna.

The members of the ethnic groups of Ulaanbaatar, formerly anglicized as Ulan Bator, literally “Red Hero”, live in the capital and largest city of Mongolia. The city was founded in 1639 as a nomadic Buddhist monastic center. It settled permanently at its present location, the junction of the Tuul and Selbe rivers, in 1778. Prior to that occasion it changed location twenty-eight times, each new location being chosen ceremonially. In the twentieth century, Ulaanbaatar grew into a major manufacturing center. Human habitation at the site of Ulaanbaatar dates from the Lower Paleolithic, with a number of sites revealing tools which date from 300,000 years ago to 40,000–12,000 years ago. These Upper Paleolithic ethnic groups  hunted mammoth and woolly rhinoceros, the bones of which are found abundantly around Ulaanbaatar.

Ulaanbaatar was the site of demonstrations that led to Mongolia’s transition to democracy and market economy in 1990. On 10 December 1989, protesters outside the Youth Culture Centre called for Mongolia to implement perestroika and glasnost in their full sense. Dissident leaders demanded free elections and economic reform. The first free election was held in July 1990.

You may find this blog of interest-

Whole blood samples were collected from 354 unrelated healthy individuals from four ethnic groups of Mizoram, an area of northeast India inhabited by Mongolian tribes who settled there about 200 years ago.  They are divided among Hmar (80), Lai (92), Lusei (92), and Mara (90). The term Mizo is derived from two Mizo words: mi and zo. Mi in Mizo means ‘person’. According to one view, zo means ‘highland’ and Mizo means highlander or person living in high hills. Though the term Mizo is often used to name an overall ethnicity, it is an umbrella term to denote the various clans, such as the Hmar, Ralte, Lai, Lusei etc.