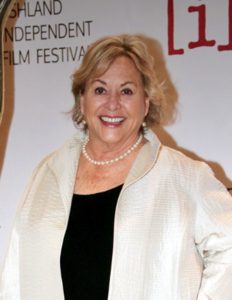 Barbara Roasting Ear Oliver, a rancher in Ashland, Ore., is an enrolled citizen of the Cherokee Nation of Oklahoma and participant in DNA Consultants’ Cherokee DNA Study Phase III. Photo by Gerry Katz; used by permission.

DNA Consultants is and has been for many years the only DNA testing company to give ancestry results based on Cherokee data. No other companies have Cherokee DNA.

The U.S. Census bureau estimates the Cherokee are the largest Indian group in the country, with a population of 331,000 (2007), or 15% of all American Indians. “A rule of thumb in genealogy circles is that anyone who can trace one of their American ancestors back to 1790 or earlier has at least some degree of American Indian admixture, however small,” says Donald Yates, principal investigator of DNA Consultants. “Since the Cherokee were the most favored marriage partners on the frontier, a lot of interest attaches to their genetic legacy.”

How useful DNA Consultants’ data for admixed Cherokee might be can be judged from the experience of the Western Cherokee Nation of Arkansas & Missouri (Murl Dean Pierson, Executive Director, Mansfield, Mo.). On June 1, 2018, this non-federally-recognized tribe concluded a DNA case study with 26 members, all of whom claimed Cherokee and Western Cherokee/Old Settlers ancestry. Compiled by Larry DeWayne Wingo of Yukon, Okla., the study used DNA Consultants’ Cherokee DNA Test. The results indicated that 21 or 80% of Western Cherokee had a high match to U.S. Cherokee Admixed (n=62), the first available dataset.

Shown also was that 26 out of 26 or 100% of Western Cherokee significantly matched the second available Cherokee population, U.S. Cherokee Admixed (n=92).

These alignments seem quite astonishing for “admixed” Cherokee, but what about “enrolled”? Presumably, this is a purer, less admixed type. Individuals’ DNA with more Cherokee in their ancestry should more closely match enrolled members—those who belong to the official government tribes, the Cherokee Nation of Oklahoma (which asserts itself legally as simply “the” Cherokee Nation), the United Keetoowah Tribe of Cherokee Indians in Oklahoma and the Eastern Band of Cherokee Indians.

The Cherokee data from the recent study by Kanthaswamy et al. are part of a major supplement to American Indian forensics representing the following tribes:

The  Kanthaswamy study will likely remain the indispensable source-to-cite for years to come.

In the new Cherokee sample, a value of 15 STRs for D3S1358, one of the 15 standard loci examined, has a frequency of .37879; in other words, almost 40% of enrolled Cherokees carry it. As such, it stands out significantly. But among other Indians it is even higher. Navajo Indians in Arizona have a frequency of .739, almost twice as high as Cherokees, while North American Indians as a whole (population 467, n=533) have a frequency of .546. The world average is .29019153. One of the lowest frequencies is in Ashkenazi Jews (only about 18% have it).

The first half of available matches in the frequency of this allele are almost all Native American or Asian populations. African or European matches fall toward the bottom. There is a pronounced concentration of the marker in Native American or Asian populations and a marked low occurrence in African or Middle Eastern or European. At the bottom of the cline is Slovakians and Austrians. According to this one measure, these are the two peoples who are most unlike Native Americans.

The distribution pattern for this Native American allele approximates that of the First Peoples and Aztlan Genes, two other American Indian autosomal markers. 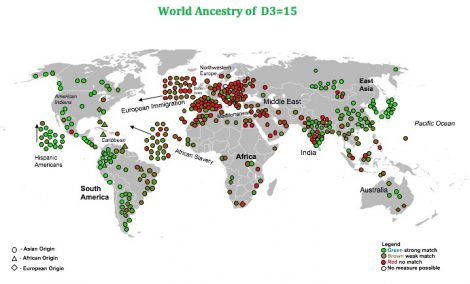 Reconciling this pattern with world migration patterns, we can state: 1) the gene is strongest throughout the New World, 2) it seems to have traveled there through a bottleneck process from East and Central Asia, 3) it is, like all alleles, represented to some degree (a small one in this case) in Central and South Africa, the birthplace of all humans and their full diversity, 4) it is virtually absent in Europe and the Middle East and 5) it experienced its greatest expansion in the Americas after Europe was settled, through a process of concentration, isolation and genetic drift.

What other alleles are modal in the new Cherokee population? We can easily construct a complete genotype as shown in the profile below, with comparisons:[2]

Such a picture of Cherokee ethnicity is consistent with the anomalous mitochondrial haplogroup distribution presented in Cherokee DNA Studies: Real People Who Proved the Geneticists Wrong and tribal history sketched in Donald N. Yates, Old World Roots of the Cherokee, with its mixed East Mediterranean and Asiatic origins in a third century BCE colonization event from Ptolemaic Egypt.

Which interpretation of the new genetic data for Cherokee Indians is correct, DNA Consultants’ or the rest of the genetics and American Indian community? Will the real Cherokee Indian please stand up?

ADDENDUM:  I couldn’t wait to test my own DNA fingerprint against the Enrolled Cherokee sample (n=33). It came up as my no. 3 match, higher than my matches to the “Admixed Cherokees”! —Donald N. Yates