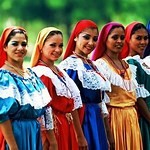 El Salvador is the smallest country in Central America. El Salvador is primarily made up of three ethnic groups; Mestizos, which are a combination of Europeans and Indians, Amerindians and the Europeans. Mestizos are 89%, Amerindians are about 10% and Europeans are about 1%. El Salvador Culture has the influence of both Roman Catholicism and Protestantism. Historically El Salvador has had diverse Native American cultures, coming from the north and south of the continent along with local populations mixed together. El Salvador belongs to both to the Mesoamerican region in the western part of the country, and to the Isthmo-Colombian Area in the eastern part of the country, where a myriad of indigenous societies have lived side by side for centuries with their unique cultures and speaking different indigenous languages of the Americas. Today, Central American Spanish is spoken by the majority of the country’s population

El Salvadoran (n=228) represents 228 unrelated El Salvadorians sampled in 2004 by the Institute of Legal Medicine in San Salvador and the Department of Human Identification, Genomica, Spain.