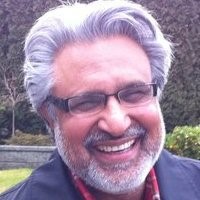 Photo: Dr. Gulzar Singh Cheema an Indian-born Canadian physician and politician. Cheema was a member of the Legislative Assembly of Manitoba from 1988 to 1993 and a member of the Legislative Assembly of British Columbia from 2001 to 2004,making him one of only a few Canadian politicians to sit in two provincial legislatures since Confederation. He is the first Indian born to be elected MLA in Canada.

Indo-Canadians or Indian-Canadians are Canadian citizens whose heritage fully or partially belongs to any of the many ethnic groups of the India. The terms East Indian and South Asian are sometimes used to distinguish people of ancestral origin from India in order to avoid confusion with the First Nations of Canada.

According to Statistics Canada, Indo-Canadians are one of the fastest growing communities in Canada, making up the second largest non-European ethnic group in the country after Chinese Canadians. The highest concentrations of Indo-Canadians are found in the provinces of Ontario and British Columbia, followed by growing communities in Alberta and Quebec as well, with the majority of them being foreign-born.

The East Indian – Canadian population data represent DNA samples from 167 East Indian-Canadian (http://en.wikipedia.org/wiki/Indo-Canadians; http://en.wikipedia.org/wiki/Anglo-Indian_Canadian) individuals living in the nation of Canada. Samples were provided by the Centre of Forensic Sciences in Toronto, Ontario. For more details on this population, see: