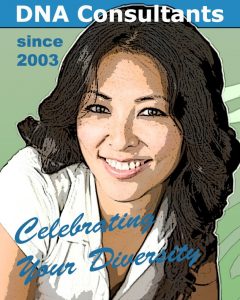 Commemorative stamp from 2013. We are republishing this interview from the early days of DNA Consultants since the topics it touches on have again become timely with the advent of a new form of “next-generation” DNA testing—ancient DNA.

Who knew that some DNA companies have dirty little secrets? I didn’t. I thought this was more in the line of “All My Children” until I got Dr. Donald Yates, principal investigator at DNA Consultants, on the phone. It turned out to be a most interesting phone call. I had to pull over in the car as he called me back. I took notes in the golden twilight of the Sonoran desert not far from my home in Carefree, Arizona. Ack-ack-acking flickers and darting purple martins flew about. They had made their home in holes in the saguaros. The barren mountains seemed surreal, like a scene out of “The Lord of the Rings.”

Can you tell us something about your background?

I was born near Atlanta, Georgia in 1950. My parents were from Alabama and we had a typical background of English, Scots-Irish and Cherokee Indian. Most people don’t realize how strong the Scottish and Irish background is in the South or indeed the whole U.S. The Brits were clearing the Highlands and raising the rent on the Irish during America’s colonial period. What upstanding Englishman or Englishwoman would want to leave London or Birmingham or York or Lincoln? Few. America’s earliest settlers were usually down-on-their-luck Scottish, Welsh and Irish. My earliest Yates ancestor was a Jewish merchant and explorer who came over and inspected the future site of Jamestown, wrote some disparaging notes in his ship’s log and sailed right back to England. He later sent some poor relations over. My Indian ancestors (who account for about one-fourth of all) were happy to see him go and a little sorry to see the Jamestown crowd arrive. All my life, as you maybe can tell, I have been interested in ethnicities and cultures, simply because I received such an interesting mix of them both.

Wow, what an interesting background you have! Can you tell us what you do for DNA Consultants?

I am the owner, founder and director of research and development, which entails pure and applied research into genetics and statistics and turning ideas developed in the laboratory into products that can be marketed to the consumer. A business partner once told me, “Well, your job is to keep the boys in marketing and sales honest.”

There’s some truth to that. You can’t have the sales force or social media over-promising. Fortunately, though, I think our people just basically “get it” and are well educated and responsible as it is. There’s little need to curb their enthusiasm or anything. We’ve got a dynamite product and it is only getting better.

Great! And what made you interested in DNA testing for ancestry purposes?

I was a professor at an Eastern university pursuing historical research. One day I received an email from a colleague telling me about this rare Appalachian ethnic group called Melungeons. To make a long story short—or rather to make a short story long —it turned out that DNA could solve the mystery of the Melungeons, and my own mother was clearly of Melungeon descent. Next, I ordered my own DNA to be tested. A company that shall be nameless sent back my results but I couldn’t believe them. They detected no American Indian and had me down as a 100% white boy. I knew that was wrong! I sent my DNA in to three more companies who confirmed my suspicions. The head of the nameless company called me finally and apologized for bungling my sample and refunded my money. For three years I thought I was somebody else! By this time, DNA had become more than a sideline.

We see it has! But there are lots of different kinds of DNA tests. Can you compare this with haplotype testing? What are the benefits of an autosomal DNA test?

Haplotypes (the word means “single type”) are misleading and very limited in their information. They can only tell you about two lines in your family tree, the direct male and direct female line of descent. If you go back several generations you have hundreds of lines, not just two. These are all ignored in haplotyping studies. Autosomal DNA on the other hand comes from both parents, male and female lines, equally, all four grandparents, all eight great-grandparents, and so forth. It is a reflection of your entire ancestry, not just the parts we happen to have a simplistic handle on.

I did not realize this. I am betting a lot of your audience did not either. So, does that mean all DNA tests that say autosomal are the same? If not, how do they differ, and how can I, as the consumer, tell them apart according to what I am looking for in a test?

Here is one of the dirty little secrets of DNA testing. Autosomal means non-sex-linked, because autosomal markers are located on chromosomes that do not include the X and Y or sex chromosomes. Hence, a male or female can take an autosomal test. We do not need to know whether you have an XX chromosome and are female or an XY and are male. But many companies stretch the term. They mean by autosomal that they are looking at markers not on the sex chromosomes but they don’t tell you that the linkages on those markers all came from haplotyping studies, that is sex-linked. Thus, a lot of results are really mirages and self-reinforcing illusions. One company told me I was Finnish and 100% Northern European and had no American Indian ancestry composition at all. That was because they relied on outdated theories associated with mitochondrial and Y chromosomal haplotype phylogeny. There are more things in the world than genetic philosophy knows of, to paraphrase Shakespeare. I wrote in one of my scholarly publications that geneticists had pretty much botched genetic ancestry. Few of their studies have real case histories in them. Maybe a new generation will get things right.

Let’s hope so! How do you know, as the consumer, what kind of DNA test to get?

It’s very, very difficult to make an informed choice. Not many companies have a broad range of tests, so they are putting their own brand, whatever it may be, first and foremost and not talking about alternatives. If you want to cut through the confusion you usually cannot find a live person to counsel you. I’m happy to say we’ve changed that at DNA Consultants and you can always get trusted good advice. It’s not like trying to call Bill Gates with a problem over your Windows Update. We are emphatically not “hard sell.” I talk to clients occasionally and there have been some of them I do not even encourage to purchase a DNA test. One lady called me and said all her ancestors came from Germany. Why should she take the test? I told her since she already knew her ancestry she should not spend the money, unless she just wanted confirmation of what she already knew. Others, particularly those who are adopted, have a much bigger incentive to take the test. And most in the United States have ancestry from various countries. Or their ancestors may have traveled from one region to another. Many are mixed. There’s no other way they’re going to find clues to their complete ancestry except with a true autosomal DNA test.

Amazing! This is like the best kept secret I have ever heard of! How long has next- generation DNA testing been around? Where do you think it is headed?

Autosomal population analysis has actually been used in law enforcement and detective work for over ten years, quietly, but the secret has just got out to the general public. In the meantime, many companies and early adopters of DNA testing, particularly genealogists, got very good at haplotyping. I know little old ladies in tennis shoes and self-important men who seem to dominate the genetic genealogy scene, and they think autosomal ancestry analysis is a black art, maybe worse than astrology. But as we’ve discussed, that is only half the story, or less than half.

Yes, I am amazed at all that you have shared. Thank you. It is a real eye- opener. And are you expecting any new and exciting products out for DNA Consultants in the near future?

Stay tuned. I’ll give you one hint: think genes of history.

We will. We will have to get back with you at a later date. Thank you!