Our book Old World Roots of the Cherokee (McFarland, 2012) describes an expedition from Ptolemaic Egypt that brought the original nucleus of the Cherokee people across the Pacific to America. One of the key pieces of evidence is the Thruston Tablet, also known as the Rocky Creek Stone.

This engraved limestone tablet was exhumed in a Mississippian 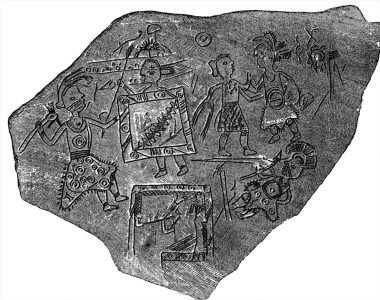 Period mound near Castalian Springs in Sumner County, Tennessee by archeologist Gates P. Thruston in 1870. It depicts scenes of warfare, a peace treaty, marriage and trade relations involving a Cherokee chief, dressed in a Greek hoplite’s armor, and a local foe with a Mohawk hairdo, feathers and large square shield with “sky-serpent” design.

The obverse side shows how the two tribes sue for peace and smoke the calumet in a longhouse. The Cherokee chief, plainly identified by his topknot, sun-skirt and lunette around his neck, then gives his daughter in marriage to the opposing chief . She carries a wampum belt signifying peace, wears a plaid kilt and has a star of David on her breast (pp. 80-81).

Writing on the Thruston Stone includes ogam (a type of stick alphabet), Tifinagh  (a North African script) and some pictograms that have not been identified . . . until now. 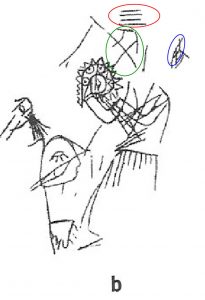 ns of both the reverse and obverse to John Ruskamp, author of Asiatic Echoes-The Identification of Ancient Chinese Pictograms in pre-Columbian North American Rock Writing(Kluwer, 2013). The unidentified writing system turns out to be Chinese.

“It appears to me that there could be three Chinese based symbols involved with this item,” reports Ruskamp. “First, within the red outline the four horizontal lines may be for the number four ‘Si.’ If so, this is one of the oldest styles of Chinese script used for writing 4.

“Second, within the green outline the stylized X-shaped stick-man could be a figure of ‘Wen,’ which in this case looks as if it is holding a fishing pole with a forked end of the line. Or it could just be a drawing of a stick-man, as this is a difficult image to work with because of its artistic nature.

“Finally, within the blue outline there appears to be the Chinese symbol ‘Mi’ for thread or rope (a couple of twisted fibers). This may be a separate drawing, or it could relate to the larger depictions.”

In addition, we note that there are similar pictograms on the front in the upper right, as well as a Chinese seal script mark in the upper left.

Putting it all together, although much still remains to be elucidated, the Thruston Stone appears to record contracts between the Cherokee, Shawnee and a third party who used Chinese writing. Since the principal figure is shown wearing ceremonial attire appropriate for the ancient world (500 BCE to 500 CE), and given the use of Chinese seal script and primitive pictograms, not to mention the ogam and Tifinagh, could the Thruston Tablet be a lot older than its archeological context suggests?

Could it in fact commemorate the original expedition of the 3rd cent. BCE in which Chinese ships helped transport the colonists to the New World? Were the Chinese pictograms made by the hand of a Chinese trade partner or simply by someone on these shores familiar with Chinese writing? Did the Algonquian tribes (to which the Shawnee belong) use Chinese writing? Does the pictogram of the rope (Mi) stand for the Twister Clan (Cherokee Haplogroup B), whose name, like that of Hilo, is derived from the twisted navigational ropes emblematic of Hawaiians? And finally, is the central symbol on the obverse really a rooster? If not, what is it?