Review of Cleopatra, A Life by Stacy Schiff
and Some Thoughts on the Ptolemies and Incest

She had a big nose but was she fat? 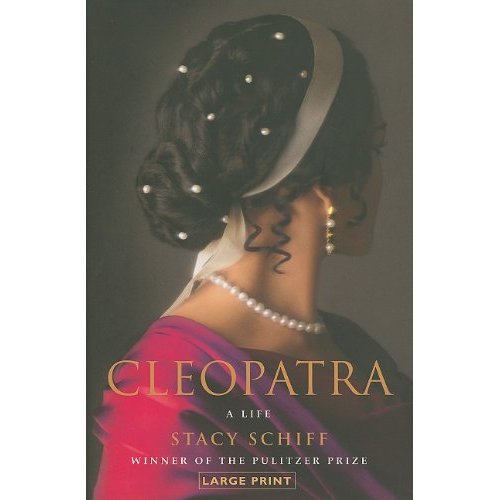 There have been many biographies of Cleopatra, called the Fatal Monster by the Roman poet Horace. About the author of this newest one, we are informed, “Stacy Schiff is the author ofVéra (Mrs. Vladimir Nabokov), winner of the Pulitzer Prize; Saint-Exupéry, a Pulitzer Prize finalist; and A Great Improvisation, winner of the George Washington Book Prize and the Ambassador Book Award. She has been a Guggenheim Fellow, and a fellow at the center for Scholars & Writers, and received an Academy Award in Literature from the American Academy of Arts and Letters. Schiff has contributed to The New Yorker andThe New York Times, where she has been an op-ed columnist. She lives in New York City.”

A blurb on the back of my copy, which my wife gave me for Hanukkah at my hinting, Joseph J. Ellis oozes, “It is a beautiful pairing–the most alluring and elusive woman in recorded history, and one of the most gifted biographers of our time. Style, like leadership, is difficult to define, but we know it when we see it. We see it here on every page.”

Am I the only one to be irritated by Ms. Schiff’s much vaunted style or pretense to scholarship (she is called a “great historian” in another blurb on the book jacket)? Is it too late to get the Putlitzer Prize Committee to reconsider? Is this the way books are now marketed, trumpeted about like digital reality choices or teenage girls’ ring tones?

I haven’t made it past Chapter 2 (which has the Harry Potter title of “Cleopatra Captures the Old Man by Magic”), but I have been repeatedly arrested in my attempt to read the peculiar style of this Pulitzer Prize-winning author, not by admiration and awe but shock and misunderstanding. Here is a sample that stopped me on p. 20:

She hailed instead from a line of rancorous, meddlesome, shrewd, occasionally unhinged Macedonian queens, a line that included the fourth-century Olympias, whose greatest contribution to the world was her son, Alexander the Great. The rest were atrocities.

There are several things wrong with these two sentences (ask my wife, who teaches Freshman Composition at a community college, bless her heart). Let me list some, in the spirit of an old-fashioned schoolmaster:

Well, you get the idea. Schiff has read too many historical novels and obviously been to too many writing workshops and written too many grants, but what about her content and scholarship? Having read several books on Cleopatra, including Michael Grant’s biography published, lo! these forty years ago, and having a doctorate in classical studies, I was keen on seeing if the new stupor mundi did its subject justice from a factual or evaluative point of view. I am sorry I can’t give a good report.

My old Swiss Doktor Mutter in grad school used to say of a recommended source it was “steeped in the literature.” If the author of this new “definitive” biography is steeped in anything it is Celestial Seasonings. The book reads as though it were written between emails and then tweeted to her fans in breathless acts of self-admiration.

The reason I am interested in Cleopatra is that was the name of Pocahontas’ Cherokee mother. The real Pocahontas, her real mother. Cherokee stories are full of the Macedonians, Jews and Thracians; witness the many tales of Stone Finger or the many Greek names. I am Cherokee, and a Pocahontas descendant, so I would like to find out all I can about my kinswoman’s namesake. My interest goes beyond following the latest trend or craze in historical fiction.

I was particularly interested in the Ptolemies’ habit of sister-brother marriage or incest. What does Schiff make of this? Before I answer that question, what does Schiff say of Cleopatra’s parentage and genealogy? It is all very lurid and sketchy to be sure, or to put it in the words of the publisher, just, you know, “astonishing if rare historical facts meticulously and lovingly excavated.” The afterword thanks a zillion people, including “big names” like Sarah B. Pomeroy (an authority on women in classical antiquity) and “the late Lionel Casson” (born Lionel L. Cohen, who died at age 94 on July 18, 2009). Included are a passel of editors at Little, Brown (“At every stage they have set the gold standard”), as well as a publicist, Jessica Almost, at the literary agency William Morris “for shepherding book and author along.” Stop! That’s more than we wanted to know.

First, who was Cleopatra’s mother? Any “definitive” biography ought to address this subject. Here’s what Schiff says:

Of Cleopatra’s mother we have neither glimpse nor echo; she disappears from the scene early in Cleopatra’s childhood and was dead by the time Cleopatra was twelve (p. 26).

Here’s what Michael Grant wrote in 1972 (described accurately as “an eminent historian who has held distinguished academic posts”),

We do not know who Cleopatra VII’s mother was. In view of her daughter’s subsequent fame this is rather strange (p. 3).

Grant goes on to weigh the papyrological evidence and other historical witnesses. He concludes,

On the whole, then, it seems most likely that Auletes’ first wife and sister, Cleopatra V Tryphaena, was the mother of our Cleopatra (p. 4).

What of the Ptolemies’ incestuous practice of marrying brother and sister over many generations? Schiff writes that there is no word for “incest” in the Greek language. Really? What was the Oedipus cycle about? Something Sophocles, Euripides and the other playwrights had no word for among the tens of thousands they expended on the theme? She also writes,

The practice resulted in no physical deformities but did deliver an ungainly shrub of a family tree (p. 21).

Grant straightforwardly writes, on the other hand,

Since the time of Ptolemy II there had been many…brother-sister marriages in the same royal house, and, in spite of obscurities regarding her pedigree, there is no doubt that Cleopatra VII, for all her outstanding intellectual and physical endowments, was the product of generations of incest. As those who breed cattle are well aware, the marriage of near relations, although it gives a double chance for blemishes to appear, also makes the recurrence of initial excellences more probable, without necessarily impairing fertility

And as to the question of whether Cleopatra was tainted or twisted by her genealogy (one Schiff skirts):

It is doubtful, however, if the Ptolemies escaped genetic trouble altogether, for a number of them were abnormally fat. This characteristic had been present in the family since its first emergence upon the historical scene, and then Ptolemy VI Philometor, and Cleopatra’s great-grandfather Ptolemy VIII Euergetes (Physcon), and her great-uncle Ptolemy X Alexander I, were all monstrously overweight. It is not clear if this disability also appeared on the female side of the family; at any rate there is no record of Cleopatra, who only lived to the age of thirty-nine, becoming gross. Nevertheless, it is a possibility that certain elements in her character may have been due to this persistent in-breeding — notably her total absence of moral sense, and a tendency to murder her brothers and sisters which may have been partly an inherited family habit (p. 27).

But for the battle of Actium, it would have been the Egyptian Empire, not the Roman Empire, that dominated the last 2,000 years of “Western Civilization,” as it had the previous 3,000 before the Common Era. Instead of the voodoo vamp sport of scribblers and schoolboys, Cleopatra would be the most revered political figure of our educational institutions and popular culture, akin to Elizabeth I for the British and English-speaking peoples. Schiff’s book does not do Cleopatra or Ptolemaic history justice.

The only thing we know for sure about her is that she committed suicide with the bite of a snake after her peace overtures were spurned by Octavian, the future Augustus. It was a noble gesture, refused, and a death undeserved. Her children were accepted into the Roman nobility and raised by Octavian’s half-sister Octavia. Their blood flows in the genealogies of many nations today.

It is sad to see Cleopatra VII reduced to a tawdry reality show star by the modern American publishing industry.